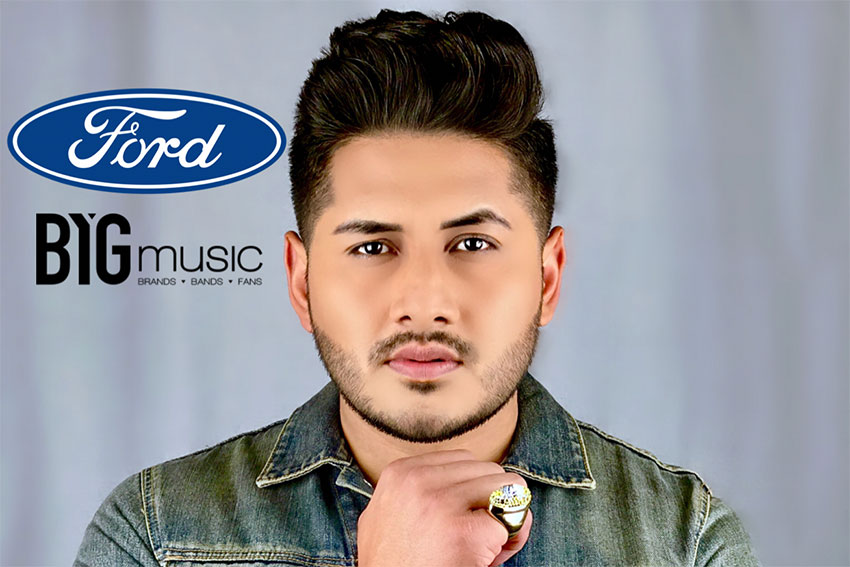 Ford Motor Company partners with Leyo for new musical project and give fans a chance to win $30k towards a new vehicle.

The Ford Motor Company and singer/songwriter Leyo have joined forces to help fund his new musical project via a BYGMusic social media effort and give fans a chance to win $30,000 towards a new Ford vehicle. Beginning the week of June 19th till the week of September 12th, fans will have to respond to a series of call-to-action posts on Leyo’s official Facebook, Instagram and Twitter pages (@OfficialLeyo on all platforms) in order to enter the contest at www.bygford.com/leyo

Entering is easy! Fans are to click on a link that will direct them to Leyo’s personal Ford landing page created by BYGMusic (available in both English and Spanish) and will then be asked to enter their information (name, e-mail and zip code) to become eligible to win the $30,000. While submitting their information, fans will also be given the option to “Opt In”, agreeing to become a Ford Hand Raiser. It is crucial for fans to “Opt In” in order for Leyo to receive the maximum amount per action. Fans will also be asked to watch a short 30-second video for an additional five entries, for a total of 6 after submitting their information. Fans must be 18 years old to enter the contest.

Listen to his current single "Enamorado" at https://soundcloud.com/officialleyo/leyo-enamorado/s-hYRRd

ABOUT LEYO:
LEYO (Leonardo Mendez) was born in Orange County, California. Growing up in a Mexican household, he listened to the greats of Spanish romance music and discovered his deep connection to the genre. LEYO has been greatly influenced by artists such as Juan Gabriel, Luis Miguel, Christian Castro, Luis Fonsi, George Michael, Josh Groban and Ricky Martin. His deep, rich tone and wide vocal range allows him to tell the story of the greatest ballads with immense intimacy, tenderness, and power. In 2006, a chance audition landed him a place on season five of Telefutura’s singing competition show, "Objetivo Fama." Leyo was known as "el bufon de la casa" (the joker of the house) out of the other 19 aspiring singers. Leyo quickly became a fan favorite by competing and performing songs by some of music’s greatest vocalists like Marc Anthony, Christian Castro and Pepe Aguilar. LEYO continued to grow into his own as a vocalist from this experience, coached by show judges and industry experts Roberto Sueiro, Fernando Allende and Mexican singer Jimena. A great student, LEYO humbly applied all the valuable feedback to better his craft. The run on "Objetivo Fama" came to an end, but his visibility in the public eye remained.

His sexy smile, striking looks, infectious laugh, obvious talent and outgoing personality made him a regular correspondent for "Sin Editar," an entertainment magazine show which solidified him as a favorite TV personality in Puerto Rico. LEYO completed work with legendary producer and songwriter Rudy Perez, Billboard Music Latin Producer of the Decade and President of the Latin Songwriters Hall of Fame in Miami, recording his ballad “Ya No Recuerdas.” In July 2015, “Vete Con El,” produced by Jennifer Lopez longtime producer Cory Rooney, was released and featured on Hulu’s hit show “East Los High.” Leyo has long been an admirer of lyrics and he connects to songs that tell stories of love and heartbreak. In March 2017, LEYO released his latest single titled “Enamorado.”  Currently in the studio, LEYO putting the final touches on his debut EP to be released later this year. Ford Motor and BYG Music have partnered with LEYO in a grassroots campaign to support emerging Latin Artist.