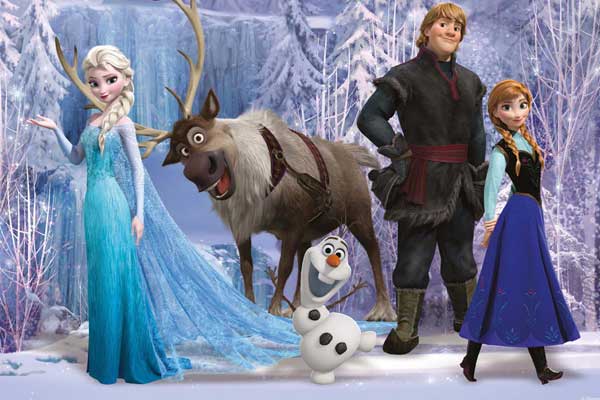 Starting Friday, FROZEN returns to El Capitan Theater in Hollywood for a sing-along of the animated hit. Not only will audiences be able to sing along to everyone’s favorite song “Let It Go,” but Elsa will be hosting a live stage performance complete with snow and a sneak peek of an all-new Walt Disney Animation Studios short, “Feast.”

For a two-week engagement starting August 22nd, El Capitan Theater in Hollywood will host special screenings including a “Pajama Night” on the weekends. The tickets are now on sale. For more information on the FROZEN festivities, read the official Disney press release.

“The El Capitan Theatre is the place to be for ‘Frozen’ fans of all ages” said Lylle Breier, senior vice president of worldwide special events for Walt Disney Studios Motion Pictures. “Come ‘Let It Go’ at the El Capitan and celebrate winter in summer this August.”

“Pajama Night” screenings will be held on Fridays and Saturdays at 4 p.m. and 7 p.m., where El Capitan guests are encouraged to wear their favorite PJs for a slumber party like no other!

For the “Pajama Night” screenings, El Capitan guests can pre-order an “In Summer” Slumber Party Pack for an additional $10, which includes a Ghirardelli frozen cocoa, a “Frozen” fleece blanket and a travel toothbrush.

On select dates, El Capitan guests may also enjoy breakfast with Elsa before the 10 a.m. movie. Seating is limited and reservations are required.

“Frozen,” which won two Academy Awards® (best animated film and best original song with “Let It Go”) and a Golden Globe® (best animated feature film), is the fifth highest grossing film of all time and the highest grossing animated film earning more than $1.264 billion globally (through June 29, 2014). Released wide domestically on Nov. 27, 2013, “Frozen” posted the No. 1 industry all-time Thanksgiving debut and Walt Disney Animation Studios’ biggest opening ever. The film’s Feb. 25 digital debut was the biggest digital release (sell-through) ever; it’s Blu-ray/DVD release on March 18 was No. 1 on the Nielsen overall disc charts for eight nonconsecutive weeks. The “Frozen” soundtrack is the top-selling album of 2014 and has spent 27 consecutive weeks in the top 5 on the Billboard 200 chart, including 13 nonconsecutive weeks at No. 1. It is certified triple Platinum, selling more than three million units. The “Let It Go” film clip from “Frozen” has been viewed more than 270 million times on YouTube.

ABOUT “FROZEN”
Walt Disney Animation Studios, the studio behind “Tangled” and “Wreck-It Ralph,” presents “Frozen,” a stunning big-screen comedy adventure. Fearless optimist Anna (voice of Kristen Bell) sets off on an epic journey—teaming up with rugged mountain man Kristoff (voice of Jonathan Groff) and his loyal reindeer Sven—to find her sister Elsa (voice of Idina Menzel), whose icy powers have trapped the kingdom of Arendelle in eternal winter. Encountering Everest-like conditions, mystical trolls and a hilarious snowman named Olaf (voice of Josh Gad), Anna and Kristoff battle the elements in a race to save the kingdom. The film is directed by Chris Buck (“Tarzan,” “Surf’s Up”) and Jennifer Lee (screenwriter, “Wreck-It Ralph”), who also wrote the screenplay. It is produced by Peter Del Vecho (“Winnie the Pooh,” “The Princess and the Frog”). Featuring original songs from Kristen Anderson-Lopez (“In Transit,” “Winnie the Pooh”) and Tony® winner Robert Lopez (“The Book of Mormon,” “Avenue Q”), and an original score by Christophe Beck (“The Muppets,” Oscar®-winning short “Paperman”), “Frozen” opened in theaters nationwide on Nov. 27, 2013. For more information, check out Disney.com/Frozen, like us on Facebook: facebook.com/DisneyFrozen and follow us on Twitter: Twitter.com/DisneyAnimation.

ABOUT “FEAST”
“Feast” is the story of one man’s love life as seen through the eyes of his best friend and dog, Winston, and revealed bite by bite through the meals they share. Directed by Patrick Osbourne (head of animation “Paperman”) and produced by Kristina Reed (“Paperman), “Feast” opens in theaters across the country on Nov. 7, 2014, in front of “Big Hero 6.”