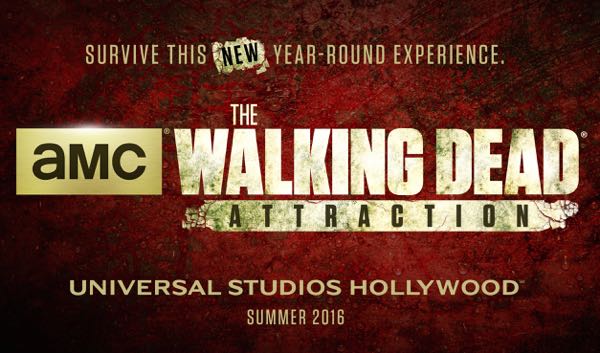 Sunday on "The Talking Dead," Chris Hardwick announced AMC’s Award-Winning Series, “The Walking Dead,” would have a permanent residency at Universal Studios Hollywood starting this summer with an intense, all-new state of the art walk-through attraction. Universal Studios Hollywood has worked collaboratively with AMC’s “The Walking Dead” for years as a signature “Halloween Horror Nights” maze.  This newly enhanced venture will take the highly sought-after experience from a seasonal, limited time offering to an authentic 365 day opportunity, raising the bar for themed walk-through attractions. Check out some cool details about the new permanent attraction.

“The Walking Dead” attraction has been a staple of Halloween Horror Nights for the last three years, but last year’s Terminus-themed walk-through was a much better experience than previous incarnations. We’re hoping the permanent attraction will step it up further and this is how they plan to do it.

1. Greg Nicotero is Involved
To further elevate the authenticity of this new attraction, Universal Studios Hollywood is partnering with “The Walking Dead’s” creative team, including visionary executive producer and director, Greg Nicotero and his special effects company, KNB Efx. Greg’s team, responsible for masterfully creating the show’s realistic decaying walkers, will construct prosthetics, utilize original molds and painstakingly apply paint and detailing to the attraction walkers.  The integral involvement of the creative team will not only inspire the emotional connection fans experience, it will be among the attraction’s key distinguishing characteristics that will define it as a living version of the show.

2. Not for the Faint of Heart
“The Walking Dead” attraction will create a no-holds-bar experience that significantly intensifies any other iteration previously developed within the theme park. Coupled with authentic walker make-up effects, sophisticated animatronic walkers, substantially more detailed set design and costuming, and highly recognizable props replicated from the series, the attraction will deliver an uncompromised realistic environment that brings guests even further into the most watched show in cable television history.


3. Not Just Recycling From Previous Versions
The “The Walking Dead” attraction will be located within an entirely new, custom built structure, situated within an expansive building complex just inside the theme park’s main entry. As a Halloween attraction, visitors had to make a long trek to reach the attraction. The long walk will be eliminated so you’re not exhausted by the time you reach the walk-through and have to walk some more. Our tired feet thank you.