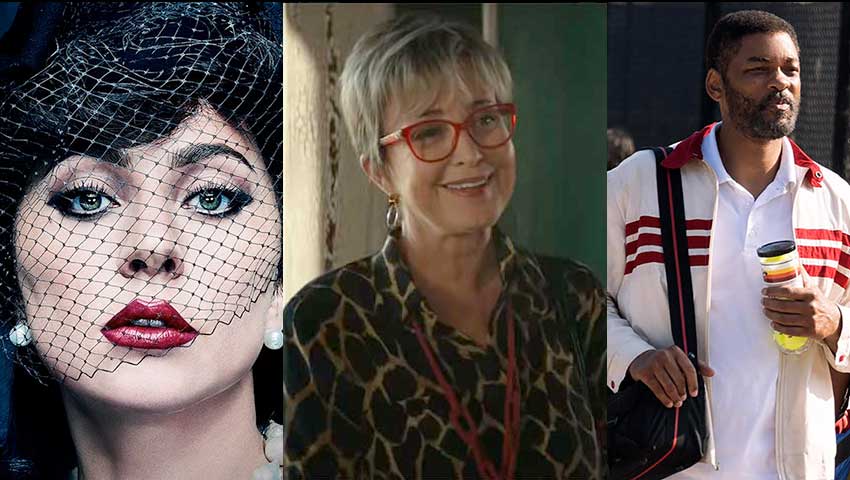 It was quite a week for trailer premieres for three new highly profiled movies. Lady Gaga, Jared Leto, and Al Pacino caused quite a stir playing members of the Gucci family in the Ridley Scott movie, HOUSE OF GUCCI while another true story is triggering talks of Oscar buzz for Will Smith in his portrayal of Serena and Venus Williams father in KING RICHARD. Watch the new trailer previews.

In HOUSE OF GUCCI, Jared Leto makes quite the transformation in HOUSE OF GUCCI playing Paolo Gucci, and Lady Gaga may be up for a Best Actress nomination with her portrayal of Patricia Reggiani who hired an assassin to kill her husband Maurizio Gucci (Adam Driver). Jeremy Irons and Salma Hayek also star in the drama that spans three decades in the Italian fashion house of Gucci. HOUSE OF GUCCI directed by Ridley Scott will arrive on November 24.

Will Smith plays Richard Williams, father to tennis legends Serena and Venus Williams, in KING RICHARD. His performance will likely generate Oscar buzz as well in the Best Actor category.

It's no secret Richard Williams pushed his daughters to be winners. KING RICHARD is the story of the persistent father on a journey to turn his daughters into champions overcoming the hardships.

KING RICHARD is in movie theaters and on HBO Max November 16.

The latest trailer for GHOSTBUSTERS: AFTERLIFE pays homage to the original movies through photos of the original cast members and a few cameos. The preview had the Twitterverse excited for the true sequel to the trilogy.

Other trailers that dropped include