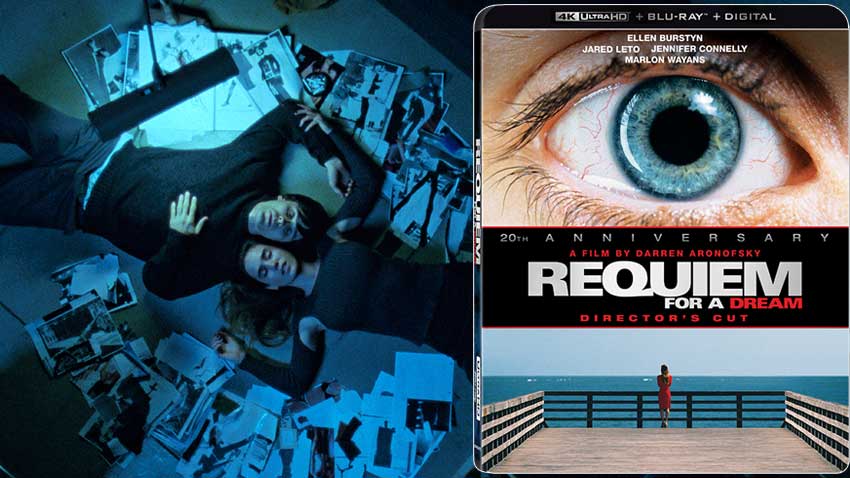 The trippiest film ever made, REQUIEM FOR A DREAM arrives on 4K Ultra HD™ Combo Pack (plus Blu-ray™ and Digital) October 13 from Lionsgate with Darren Aronofsky's Director's Cut. Starring Jared Leto, Jennifer Connelly and Ellen Burstyn, this digital version is remastered for the first time in Dolby Vision® and Dolby Atmos®. Check out the details.

REQUIEM FOR A DREAM is an adaptation of Hubert Selby Jr.'s novel about drug addiction manifesting in different ways on four Coney Island people. The visuals are hypnotic and serves as a PSA against drugs.

To celebrate the 20th Anniversary, Lionsgate® is releasing a remastered version of REQUIEM FOR A DREAM. The film cemented Aronofsky as an auteur and also launched cinematographer Matthew Libatique into one of the most in demand Director of Photography. The official announcement (see below) states Libatique supervised the remastering for the new digital release.

The film also boasts a great soundtrack with use of electronic music to capture the hypnotic visuals.

For more information about the release and a list of new features on the discs, see below.

Celebrating its 20th anniversary with a 4K Ultra HD release, REQUIEM FOR A DREAM — with a screenplay by Aronofsky and Hubert Selby Jr., based on Selby’s novel — is a hypnotic film about four people pursuing their visions of happiness. Even as everything begins to fall apart, they refuse to let go, plummeting with their dreams into a nightmarish, gut-wrenching freefall.

Available for the very first time in this stunning format, the REQUIEM FOR A DREAM 4K Ultra HD scan was supervised by cinematographer Matthew Libatique and includes four brand-new featurettes exclusive to this release. Experience four times the resolution of full HD with the 4K Ultra HD Combo Pack, which includes Dolby Vision, bringing entertainment to life through ultra-vivid picture quality. When compared to a standard picture, Dolby Vision can deliver spectacular colors never before seen on a screen, highlights that are up to 40 times brighter, and blacks that are 10 times darker. Additionally, the 4K Ultra HD Combo Pack features Dolby Atmos, which will transport viewers from an ordinary moment into an extraordinary experience with moving audio that flows all around them. Fans will feel like they’re inside the action as the sounds of people, places, things, and music come alive with breathtaking realism and move throughout the space.

The 20th Anniversary REQUIEM FOR A DREAM Director’s Cut 4K Ultra HD Combo Pack will be available for the suggested retail price of $22.99.