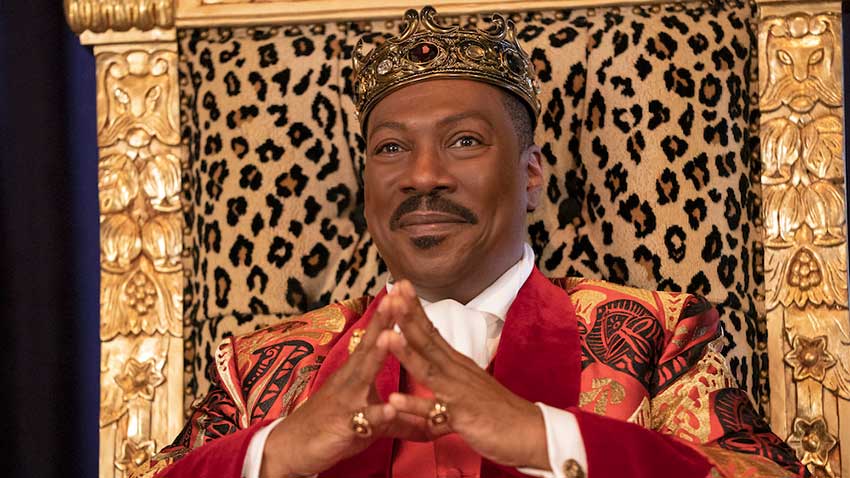 A new trailer for Amazon Prime's COMING 2 AMERICA reveals most of the film will take place in the Kingdom of Zamunda (yay!), and there may be some heart behind the story with a modern twist. The newly crowned King Akeem (Eddie Murphy) has a dilemma in that all his heirs are women which is why he sets off to find his male heir. Watch the trailer and check out the new movie poster.

Exploring Zamunda is a glorious idea especially since we didn't see much of the royal country in the first outing. No doubt the writers were inspired by the popularity of BLACK PANTHER and Wakanda to make it the setting of the COMING TO AMERICA sequel. The other modern update surrounds the idea of a woman not being able to sit at the throne as a Queen of Zamunda which propels King Akeem (Murphy) to find his sole male offspring.

A star-studded cast makes this sequel a must-see. Leslie Jones, Jermaine Fowler, Tracy Morgan and scene-stealer Wesley Snipes will no doubt bring the laughs along with returning stars Eddie Murphy and Arsenio Hall.

Set in the lush and royal country of Zamunda, newly-crowned King Akeem (Eddie Murphy) and his trusted confidante Semmi (Arsenio Hall) embark on an all-new hilarious adventure that has them traversing the globe from their great African nation to the borough of Queens, New York – where it all began.