'The Walking Dead: The World Beyond' Crossover May Address Rick Grimes Whereabouts 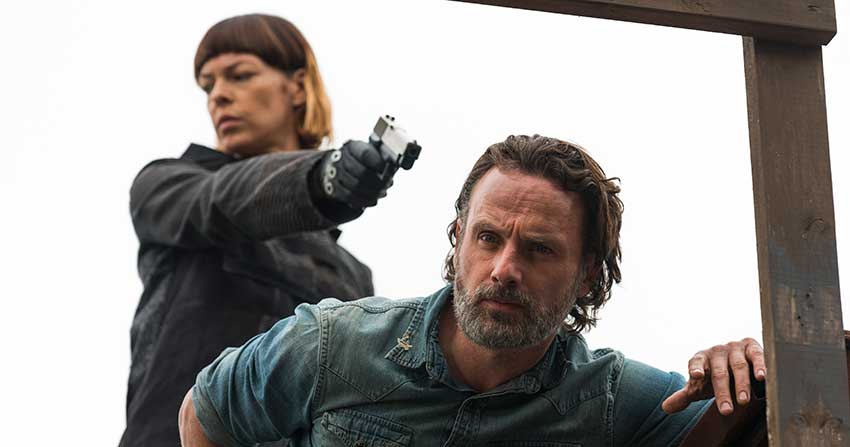 The Walking Dead: The World Beyond is bringing on a familiar face from THE WALKING DEAD with Pollyanna McIntosh reprising her role as Jadis who helped kidnap Rick Grimes (Andrew Lincoln) in season 9, episode 5. What does the crossover mean for Andrew Lincoln's return to the franchise? The latest trailer re-introduces Jadis and a new look.

The Walking Dead executive producer Scott Gimple teased a movie, so will The World Beyond's final season lead up to the movie which may see the return of both Rick and Michonne (Danai Gurira) who left the following season, hot on the trial for Rick. In the press release, Gimple hints that we'll see what happened years after that helicopter ride, and how she's connected to the three shows in the franchise.

The second season of The Walking Dead: The World Beyond premieres on October 3 at 10:00 p.m. ET/9c on AMC or a week earlier on AMC+. For more about the new season, see the press release below.

NEW YORK, NY – September 2, 2021 – AMC announced today that The Walking Dead’s Pollyanna McIntosh has joined the cast of The Walking Dead: World Beyond’s ten-episode second season premiering October 3 at 10:00p.m. ET/9c on AMC with all episodes available one week early on AMC+, beginning September 26. McIntosh will reprise her role as “Jadis,” a fan favorite from the Walking Dead.

AMC also debuted a new trailer and revealed the latest key art for The Walking Dead: World Beyond Season 2.

“We are thrilled to have the terrific Pollyanna McIntosh back as Jadis, and we’re excited for viewers to see how she collides with the characters in this part of the Universe,” said Gimple. “In our story, years have passed -- we’ll get hints of what happened with that fateful helicopter ride and learn Jadis has new allies and alliances; she is a big part of connecting the CRM and Three Circles mythology that’s seen throughout all three series. We can’t wait to share it all with fans of the TWDU,” said Gimple.

“I love the character of Jadis and I love this world so getting to inhabit her again in collaboration with the talented team at The Walking Dead: World Beyond in beautiful Richmond, Virginia was a joy. I hope audiences will catch up with the first season now so they can fully enjoy this epic final season in October,” said McIntosh.

Season two of The Walking Dead: World Beyond concludes the epic story of Iris (Royale), Hope (Mansour), Elton (Cantu), and Silas (Cumpston) -- four friends who journeyed across the country on a mission that transformed everything they knew about themselves and the world. As they face off against the mysterious Civic Republic Military and fight for control of their own destiny, goals will shift, bonds will form and crumble, and innocence will be both lost and found. Produced and distributed by AMC Studios, the series is executive produced by Co-Creators Gimple and Showrunner Negrete, Robert Kirkman, Gale Anne Hurd, David Alpert, and Brian Bockrath.