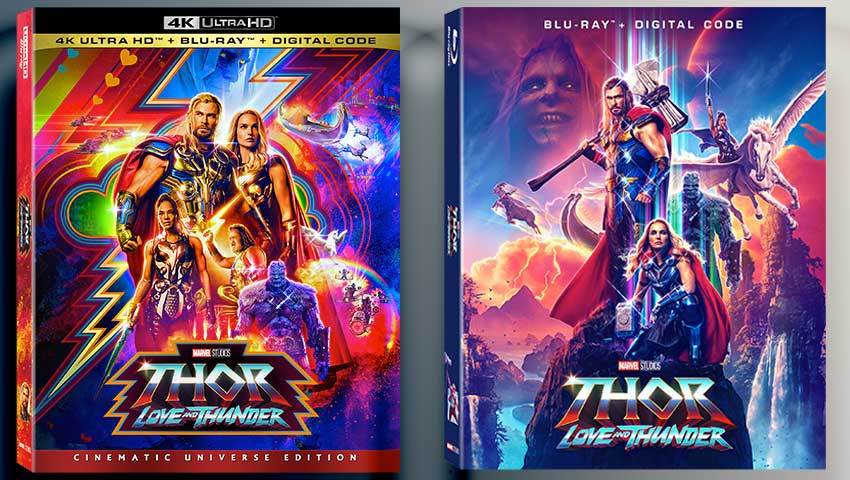 THOR: LOVE AND THUNDER arrives on September 8 and 4K Ultra HD™, Blu-ray™ and DVD on September 27. See the bonus features that will come with the home release.

Chris Hemsworth has competition as Thor in THOR: LOVE AND THUNDER with Natalie Portman returning as Jane Foster and taking The Mighty Thor mantle. The Taika Waititi Marvel film is coming to September 8 and 4K Ultra HD™, Blu-ray™ and DVD September 27. mber 27. Fans can add the film to their Marvel Studios’ movie collection and access exclusive bonus content including deleted scenes, a gag reel and audio commentary by legendary filmmaker Taika Waititi. Thor: Love and Thunder will also stream on Disney+ September 8.

The film also stars Tessa Thompson as King Valkyrie, Christian Bale as Gorr, Taika Waititi as Korg “Old Kronan God” (voice) and Russell Crowe as Zeus. The God of Thunder (Chris Hemsworth) on a journey unlike anything he’s ever faced – one of self-discovery. But his efforts are interrupted by a galactic killer known as Gorr the God Butcher (Christian Bale), who seeks the extinction of the gods. To combat the threat, Thor enlists the help of King Valkyrie (Tessa Thompson), Korg (Taika Waititi) and ex-girlfriend Jane Foster (Natalie Portman), who – to Thor’s surprise – inexplicably wields his magical hammer, Mjolnir, as the Mighty Thor. Together, they embark upon a harrowing cosmic adventure to uncover the mystery of the God Butcher’s vengeance and stop him before it’s too late.

Gag Reel – Take a look at some of the fun outtakes on set with the cast and crew of Thor: Love and Thunder.
Audio Commentary – Watch the film with audio commentary by director/writer Taika Waititi.
Featurettes

Shaping a Villain – This featurette introduces Love and Thunder’s primary antagonist, Gorr the God Butcher. Shining a light on the man who brings the character to life, this piece highlights his recruitment and process. Then fellow cast and crew reveal personal anecdotes.

Another Classic Taika Adventure – This piece looks back on Taika Waititi’s journey taking over the Thor franchise and reinventing the God of Thunder. Revisit the moment Taika was announced as the new custodian of Thor and follow Taika through the production of Thor: Love and Thunder.

Looking for Zeus – Thor, Valkyrie and Korg run into a few characters while seeking an audience with Zeus.
Wasting Time – Star-Lord and Mantis convince Thor to help their cause.

A Safe Vacation – A nonchalant Thor chats with a panicked Star-Lord and Mantis in the middle of chaos. An explosion thrusts Korg into the scene.

Fighting For You – Zeus gifts Thor a special tool after overhearing a heartfelt conversation.