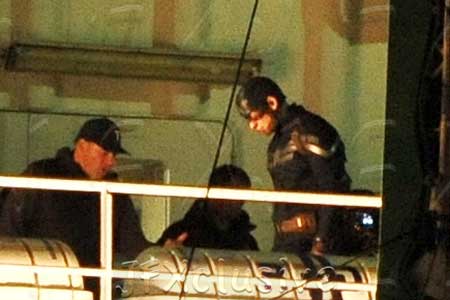 Shooting for the sequel to Captain America is under way in Los Angeles  and our sources tell CineMovie the Chris Evans return as the super soldier is going to be 100 times better than the first one.

CineMovie’s Zay Zay caught up with CAPTAIN AMERICA 2 screenwriters Christopher Markus and Stephen McFeely in Miami when the two stopped by for the red carpet premiere of Pain & Gain, another movie scripted by the pair, to give us the scoop straight from the set.

On the Pain & Gain red carpet, Christopher Markus tells Zay Zay that he’s “not genuinely not lying – it’s awesome,” about the first footage from the Los Angeles set. His writing partner Stephen McFeely added “it’s cool” and praised brothers Joe and Anthony Russo who took over the directing reigns for the sequel.  “They’re crushing it,”  McFreely stated about the directing team from television who were not well-received when Marvel announced their choice.  Regarding the action, Christopher says the “action is going to be hundred times more intense than the first movie.”

CAPTAIN AMERICA: THE WINTER SOLDIER will also be shooting in Cleveland, Ohio, and Washington D.C. In the sequel to the Marvel hit, Steve Rogers struggles to embrace the modern world as a superhero with the help of fellow Avenger Natasha Romanoff, aka Black Widow who partner to battle a shadowy enemy in Washington D.C.