General Zod is the star of the latest movie trailer for MAN OF STEEL as he threatens to destroy Earth if the humans don’t turn over Kal-El aka Superman. Watch the new action-packed trailer that features alien invaders and view the new character movie poster featuring Russell Crowe. 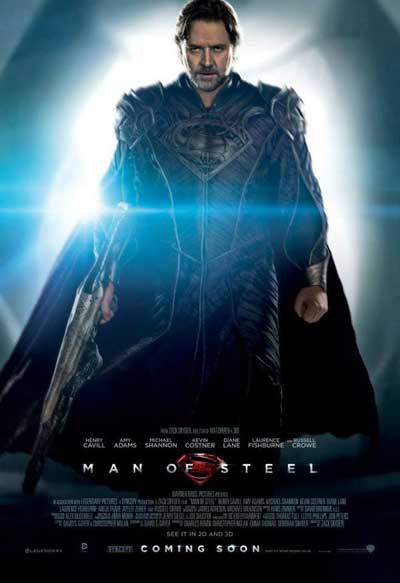 MAN OF STEEL ‘s latest trailer “Fate of Your Planet” features alien ships, space suits, explosions and Superman in fine form fighting Zod.  What’s not to like about Zack Snyder’s MAN OF STEEL?  The trailer is chock full of action that promises to be quite a ride.  The director behind 300 and the Watchmen brings his visual flare in this CGI heavy preview.

It’s going to be tough topping Terence Stamps’ General Zod in Superman II, but acclaimed actor Michael Shannon is looking like a worthy replacement.   Zod’s space suit is also an interesting choice given it looks a bit like the space jockey in Alien.  There is obviously an HR Giger influence in the design.  In the trailer, even Lois Lane (Amy Adams) dons the space suit, most likely  because she is kidnapped in order to draw Superman out of hiding.  I smell a damsel in distress.

The first character movie poster was also released featuring a cool looking Russell Crowe as Jor-El holding some kind of weapon. More character posters are promised and we can't wait to see General Zod's mug on a movie poster.

What do you think about the trailer?

Action Adventure. A young boy learns that he has extraordinary powers and is not of this Earth. As a young man, he journeys to discover where he came from and what he was sent here to do. But the hero in him must emerge if he is to save the world from annihilation and become the symbol of hope for all mankind.