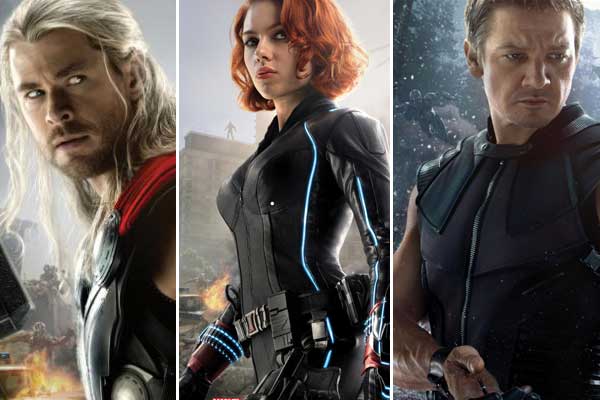 The actors behind the Avengers helped unveil their character posters for AVENGERS: AGE OF ULTRON on their Twitter accounts this past week with Robert Downey Jr. kicking it off. Chris Evans, Mark Ruffalo and Samuel L. Jackson used their social media reach to get the word out. Check out AVENGERS: AGE OF ULTRON Good Guy Posters gallery below.

The Avengers don't look much different nor do their outfits except for Scarlet Johansson's Black Widow who's sporting a new leather suit that's reminiscent of the Tron look with LED lights that are apparently part of a new weapon Natasha unveils in the most recent trailer. Jeremy Renner's Hawkeye outfit looks like an upgrade, but not as impressive as Natasha's much cooler looking new duds.

The obvious next move by Marvel will be to release the bad guy character movie posters since there are plenty of them like Ultron, Scarlet Witch, Quicksilver and Vision. We are 7 weeks aways from the May 1st relese date, but the wait seems longer