Be ready to be scared out of your comfort zone. THE CONJURING, a new movie from the director of Saw and Insidious, looks freaky.  Take a look at trailer #2 and the new movie poster. 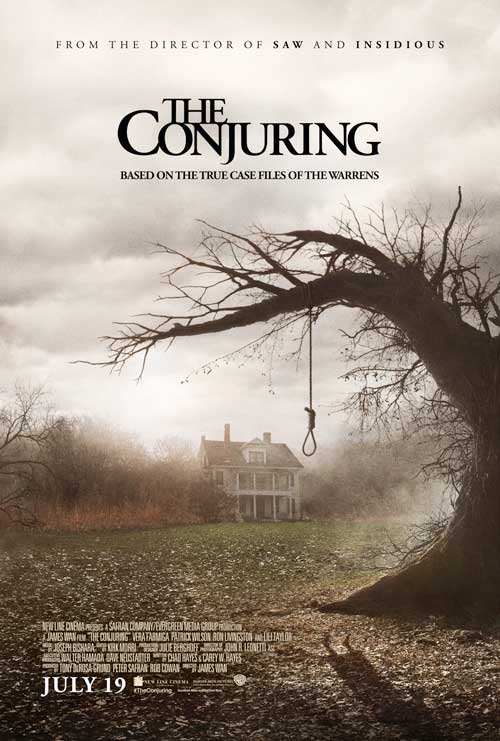 Fans at WonderCon got a frightful treat when Warner Bros. premiered the trailer and clips at last weekend's comic book convention in Anaheim, CA. Fans and the media took to Twitter to boast about what they had just seen.  It surely peeked my interest in the movie and the new trailer which premiered on the movie's Facebook page certainly has those moments. The teaser trailer didn't quite do THE CONJURING justice, but this new preview surely has you wanting to cover your eyes for what's about to come.  Director James Wan certainly has flair for old-school scare tactics as proven from his previous work.

Does the trailer freak you out?  Rate it.

Supernatural Thriller. Before there was Amityville, there was Harrisville. “The Conjuring” tells the true story of Ed and Lorraine Warren (Patrick Wilson, Vera Farmiga), world renowned paranormal investigators, who were called to help a family terrorized by a dark presence in a secluded farmhouse. Forced to confront a powerful demonic entity, the Warrens find themselves caught in the most horrifying case of their lives.
From New Line Cinema comes a feature film drawn from the case files of married demonologists Ed and Lorraine Warren. “The Conjuring” stars Academy Award® nominee Vera Farmiga (“Up in the Air,” “Orphan”) and Patrick Wilson (“Young Adult,” “Prometheus”) as the Warrens, and Ron Livingston (HBO’s “Band of Brothers”) and Lili Taylor (“Public Enemies”) as Roger and Carolyn Perron, residents of the house.