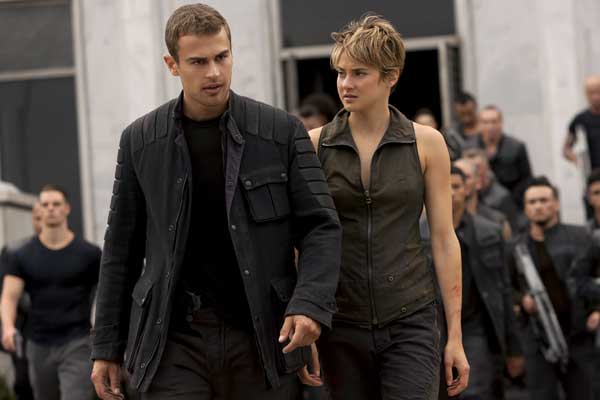 The final trailer for THE DIVERGENT SERIES: INSURGENT is jam-packed with action, and die-hard fans are counting down the days until March 20 when the sequel hits theaters. Those fans have probably already bought their tickets which are now available at various sites.

There’s plenty of action not only in the stunt department but between Tris (Shailene Woodley) and Four (Theo James) with some hot and heavy kissing in between saving the world in this final preview weeks before the movie opens.

THE DIVERGENT SERIES: INSURGENT raises the stakes for Tris as she searches for allies and answers in the ruins of a futuristic Chicago. Tris (Woodley) and Four (Theo James) are now fugitives on the run, hunted by Jeanine (Kate Winslet), the leader of the power-hungry Erudite elite.  Racing against time, they must find out what Tris's family sacrificed their lives to protect, and why the Erudite leaders will do anything to stop them.  Haunted by her past choices but desperate to protect the ones she loves, Tris, with Four at her side, faces one impossible challenge after another as they unlock the truth about the past and ultimately the future of their world.

THE DIVERGENT SERIES: INSURGENT opens nationwide in 2D, RealD, and Digital 3D on March 20, 2015! The early birds can purchase their tickets now at Fandango, MovieTickets.com, AMCTheatres.com, and Cinemark.com with a chance at receiving a free download of the blockbuster first installment of the “Divergent”