THE GREAT GATSBY Pushed Back To Summer 2013 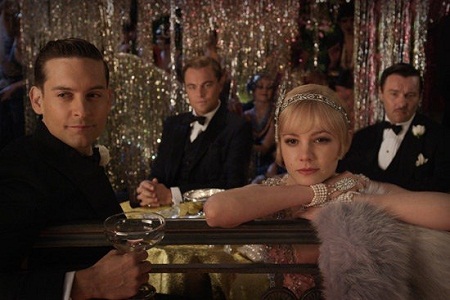 The 3D adaptation of THE GREAT GATSBY starring Leonardo DiCaprio and Tobey Maguire has moved from Christmas 2012 to Summer of 2013. According to a release from Warner Bros., early footage of the Baz Luhrmann film has generated positive buzz for a film more fitting of a blockbuster release.

Warner Bros. Pictures and Village Roadshow Pictures announced the new release date of "The Great Gatsby" on Monday. Dan Fellman, Warner Bros. President of Domestic Distribution, said in the press release, "Based on what we've seen, Baz Luhrmann's incredible work is all we anticipated and so much more. It truly brings Fitzgerald's American classic to life in a completely immersive, visually stunning and exciting way. We think moviegoers of all ages are going to embrace it, and it makes sense to ensure this unique film reaches the largest audience possible."

The new release date takes THE GREAT GATSBY out of the Oscar race as expected and into a more mainstream frame for the what will be a spectacle of Luhrmann proportion (Moulin Rouge, Australia). Veronika Kwan Vandenberg, President of International Distribution, Warner Bros. Pictures stated in the press release, the early reactions merited the move. "this film he has done something completely unexpected—making it in 3D—while capturing the emotion, the intimacy, the power and the spectacle of the time. The responses we've had to some of the early sneak peeks have been phenomenal, and we think 'The Great Gatsby' will be the perfect summer movie around the world," she said.

"The Great Gatsby" follows Fitzgerald-like, would-be writer Nick Carraway as he leaves the Midwest and comes to New York City in the spring of 1922, an era of loosening morals, glittering jazz, bootleg kings, and sky-rocketing stocks. Chasing his own American Dream, Nick lands next door to a mysterious, party-giving millionaire, Jay Gatsby, and across the bay from his cousin, Daisy, and her philandering, blue-blooded husband, Tom Buchanan. It is thus that Nick is drawn into the captivating world of the super rich, their illusions, loves and deceits. As Nick bears witness, within and without of the world he inhabits, he pens a tale of impossible love, incorruptible dreams and high-octane tragedy, and holds a mirror to our own modern times and struggles.