A new trailer and poster for Brad Pitt's WORLD WAR Z has arrived. The poster is nothing to boast about but the new full-length trailer has zombies on a plane which should send chills down your spine. 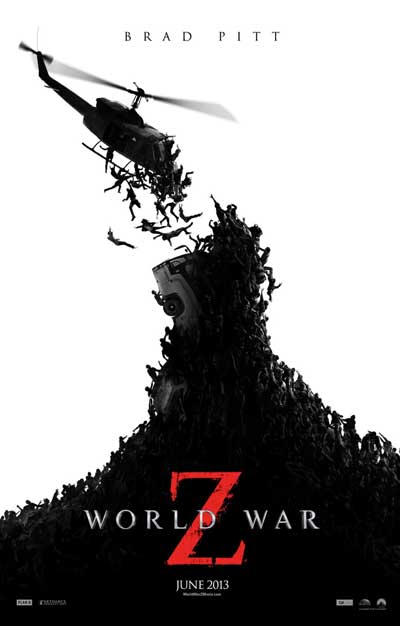 Less CGI zombies are featured in the second trailer version since the teaser trailer received criticism for its computer generated dead.  This new trailer focuses more on the action and explosions than rotting corpses running up walls.  In this preview, the zombies take over a plane with bodies flying out of the damaged airplane.  Let the zombies on a plane jokes begin.

A new one-sheet was also released with masses of zombies making a zombie pyramid to get to a helicopter. Brad Pitt's name headlines the movie poster.


The troubled production, directed by Marc Forster, went through rewrites and reshoots. The CGI zombies were no help either in the word-of-mouth for the movie which many are saying bares little resemblance to the novel.  The film definitely has an uphill battle in winning over genre fans.