At San Diego Comic-Con 2009, the Showtime’s Dexter panel revealed that in addition to adding a baby to the cast this season, that John Lithgow has been enlisted to be a new serial killer. The details of his character have been kept under wraps, but John Lithgow admitted that his first victim was Dr. Dick Solomon from Third Rock From The Sun. As lovable as that character was, Mr. Lithgow reminded everyone that villains were once his stock in trade, and he’s happy to be back playing on the dark side again.
The cast is really excited about the new additions and how it will impact the show. It will be Cereal Killer vs. Serial Killer.  One fan asked the question, “If you could play another part in the show for a day, what would it be?” Julie Benz thought it might be fun to be Jennifer Carpenter’s character so she could cuss for a change, but John Lithgow replied that he wouldn’t give up his role for anything. It was too delicious. 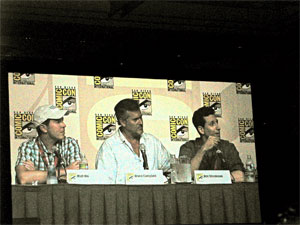 As a new fan of Burn Notice, after recently receiving cable for the first time, I was disappointed at not having Jeffrey Donovan on the panel. That disappointment however, was quickly erased by the side-splitting antics of Bruce Campbell. The banter from show creator Matt Nix and Bruce Campbell kept the room in stitches. Add in the off the cuff remarks in reaction to fan questions, and you had a comedy act ready to hit the road. This was truly the most entertaining panel of the week that I attended. And the shirt was pretty cool, too! Jeffrey Donovan, I hope to see you next year.