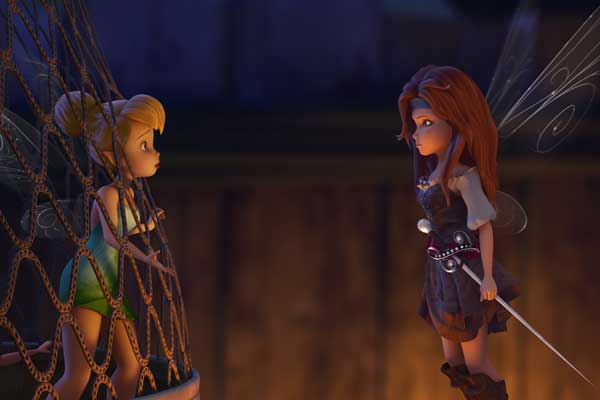 CineMovie has advance movie tickets to see Disney's THE PIRATE FAIRY starring Tinker Bell and her fairy friends in Los Angeles.  Read on to find out how you can win tickets to see the movie.

Tinker Bell is back for another adventure and this time she's returning to Skull Rock in THE PIRATE FAIRY. From the world of “Peter Pan” comes THE PIRATE FAIRY, a swashbuckling new adventure about Zarina (voice of Christina Hendricks), a smart and ambitious dust-keeper fairy who’s captivated by Blue Pixie Dust and its endless possibilities. When Zarina’s wild ideas get her into trouble, she flees Pixie Hollow and joins forces with the scheming pirates of Skull Rock, who make her captain of their ship. Tinker Bell (voice of Mae Whitman) and her friends must embark on an epic adventure to find Zarina, and together they go sword-to-sword with the band of pirates led by a cabin boy named James (voice of Tom Hiddleston), who’ll soon be known as Captain Hook himself.

With laughter, heart, magic and thrills, THE PIRATE FAIRY is available on Blu-ray and DVD Combo Pack April 1st.

To enter the THE PIRATE FAIRY Movie Ticket Giveaway, click on the Entry Form below.

PROMOTION DESCRIPTION: THE PIRATE FAIRY Giveaway (“Sweepstakes”) begins on or about March 21, 2014 2013 at 6:00 p.m. Eastern Time ("ET") and ends on March 28, 2014 at 11:59 p.m. ET (the “Sweepstakes Period”).  At the end of the Sweepstakes Period, a random drawing will be conducted to select winners from among all eligible entries received, as more fully set forth in the OFFICIAL RULES.  Entry in the Sweepstakes does not constitute entry into any other promotion, contest or sweepstakes.  By participating in the Sweepstakes, each entrant unconditionally accepts and agrees to comply with and abide by these Official Rules and the decisions of CineMovie TV, 2700 Arlington Ave. Ste. 101 Torrance, CA  90501 (“Sponsor”), which shall be final and binding in all respects.