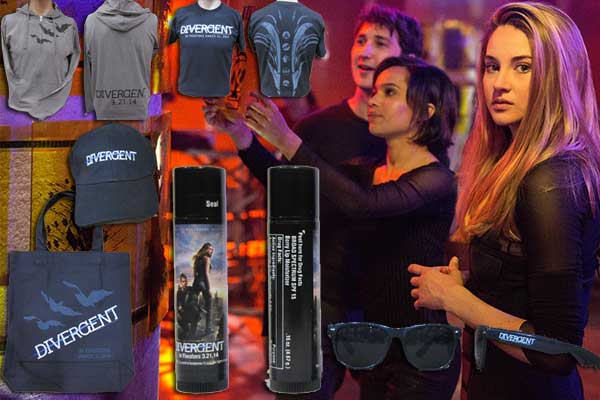 To celebrate the release of DIVERGENT starring Shailene Woodley, Kate Winslet and Theo James on March 21st, CineMovie is giving away two DIVERGENT Prize Packs which includes a DIVERGENT tote bag, t-shirt, hoodie, sun glasses and more. Read on to find out how you can win one of these cool movie prizes.

Based on Veronica Roth’s #1 New York Times best-selling novel, DIVERGENT is a gripping action thriller set in a futuristic world where society has been divided into five factions. As each person approaches adulthood, he or she must choose a faction and commit to it for the rest of their life. Tris Prior (Shailene Woodley) chooses Dauntless—the daring risk-takers who pursue bravery above all else. During the Dauntless initiation, Tris completes death -defying stunts and faces her inmost fears in spectacular simulations. When she discovers she is a Divergent, someone who will never be able to fit into just one faction, she is warned that she must conceal this secret or risk her life. As Tris uncovers a looming war which threatens her family and the life of the mysterious Dauntless leader whom she has come to love, Tris must face her greatest test yet—deciding whether revealing she is a Divergent will save her world—or destroy it.

To enter the DIVERGENT"Prize Pack" Sweepstakes, click on the Entry Form below.

PROMOTION DESCRIPTION: DIVERGENT"Prize Pack" Prize Pack Giveaway (“Sweepstakes”) begins on or about MARCH 18, 2014 at 6:00 p.m. Eastern Time ("ET") and ends on March 25, 2014 at 11:59 p.m. ET (the “Sweepstakes Period”).  At the end of the Sweepstakes Period, a random drawing will be conducted to select winners from among all eligible entries received, as more fully set forth in the OFFICIAL RULES.  Entry in the Sweepstakes does not constitute entry into any other promotion, contest or sweepstakes.  By participating in the Sweepstakes, each entrant unconditionally accepts and agrees to comply with and abide by these Official Rules and the decisions of CineMovie TV, 2700 Arlington Ave. Ste. 101 Torrance, CA  90501 (“Sponsor”), which shall be final and binding in all respects.

DIVERGENT Prize Pack Giveaway Sweepstakes is intended for participation only in the United States of America and shall be construed according to, and governed exclusively by, California law.  Do not participate in the Sweepstakes if you are not a legal resident of the United States physically located in the country on or about MARCH 18, 2014, or do not fall within the eligibility requirements set forth in the Official Rules below.

PROMOTION DESCRIPTION:  DIVERGENT Prize Pack Giveaway (“Sweepstakes”) begins on or about MARCH 18, 2014 at 6:00 p.m. Eastern Time ("ET") and ends on March 25, 2014 at 11:59 p.m. ET (the "Sweepstakes Period").  At the end of the Sweepstakes Period, a random drawing will be conducted to select winner(s) from among all eligible entries received, as more fully set forth below.

ELIGIBILITY: The prizes are only open to legal U.S. residents who are eighteen (18) years of age or older and shall be construed according to, and governed exclusively by, United States law.  Do not participate in the Sweepstakes if you are not a legal resident of the United States physically located in the United States, on or about MARCH 18, 2014, or do not fall within the eligibility requirements set forth in the Official Rules.  All submissions become property of CineMovie.TV.  All federal, state, and local laws and regulations apply.  Any taxes due are the responsibility of the winner.  Void Where prohibited or restricted by law.

WINNER SELECTION AND NOTIFICATION:  At the end of the Sweepstakes Period, winner(s) will be randomly selected in a drawing from all eligible entries received throughout the Sweepstakes Period.  The drawing will be conducted by Sponsor or Sponsor's designee, using randomization methods selected by Sponsor in Sponsor's sole discretion.  The potential winners will be notified by mail and/or e-mail using the contact information provided at the time of entry.  Sponsor shall have no liability for any winner notification that is lost, intercepted or not received by the potential winners for any reason.  If, despite reasonable efforts, potential winners do not respond within twenty-four (24) hours of the first notification attempt, or if the prize or prize notification is returned as unclaimed or undeliverable to such potential winner, such potential winner will forfeit his or DIVERGENTprize.  If any potential winners are found to be ineligible, or if he or she has not complied with these Official Rules or declines a prize for any reason prior to award, such potential k winner will be disqualified and an alternate potential  winner may be selected.  Sponsor may successively attempt to contact up to two (2) potential winners in accordance with such procedure, and if theree is still no confirmed winners of the tickets after such attempts have been made, if any, the prize may go unawarded.

WINNER'S LIST/OFFICIAL RULES:  To obtain a copy of any legally-required winner's list, send a self-addressed stamped envelope to: DIVERGENT "Prize Pack" Sweepstakes Winner's List, 2700 Arlington Ave. Ste. 101 Torrance, CA 90501.  All such requests must be received no later than six (6) weeks after the end of the Sweepstakes Period.  These Official Rules are available by sending an e-mail request to CineMovie.TV. This email address is being protected from spam bots, you need Javascript enabled to view it with "Official Rules Request" in the subject line.  Official Rules requests will not be granted after the end of the Sweepstakes Period.