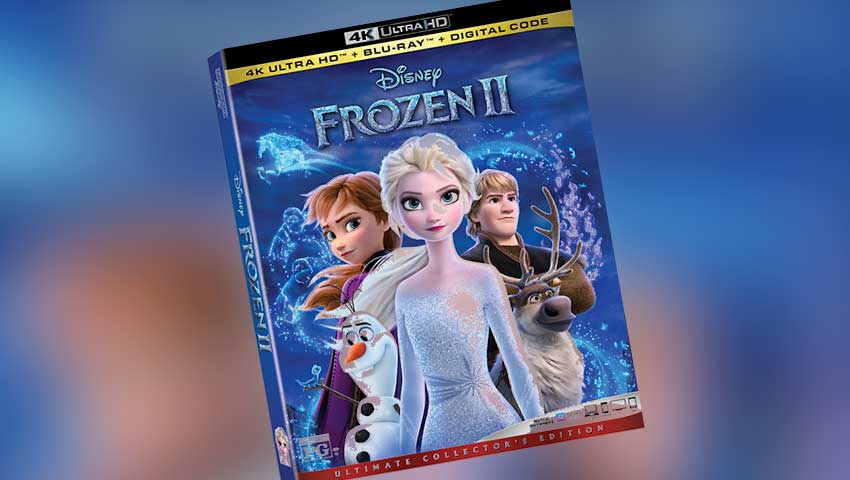 FROZEN 2 is coming to home release this month, and CineMovie has three FROZEN 2 digital movie cards to giveaway. Enter for your chance at winning below.

Walt Disney Animation Studios’ FROZEN 2 has melted hearts around the world, becoming the No. 1 animated feature of all time. Just in time for Valentine’s Day,  the follow-up to 2013’s hit Oscar®-winning Best Animated Feature,“Frozen,” comes home, with a sing-along version and all-new extras, on Digital in 4K Ultra HD™, HD and Movies Anywhere on Feb. 11, and on 4K Ultra HD™, Blu-ray™ and DVD on Feb. 25.

FROZEN 2 bonus features include deleted scenes, deleted songs, Easter eggs, outtakes and a sing-along version with lyrics to the film’s forever-infectious songs. Extras invite viewers to go behind-the-scenes to hear personal, making-of stories from the “Frozen 2” cast and crew. Fans who bring the film home early on Digital will receive two exclusive extras: an interview with songwriters Kristen Anderson-Lopez and Robert Lopez, who won an Oscar® for Best Original Song (“Let It Go,” 2014) and wrote seven original songs for FROZEN 2 and a deleted song titled “Unmeltable Me.”

PROMOTION DESCRIPTION: FROZEN 2 DVD Giveaway (“Sweepstakes”) begins on or about February 4, 2020 at 6:00 p.m. Eastern Time ("ET") and ends on February 15, 2020 at 11:59 p.m. ET (the “Sweepstakes Period”).  At the end of the Sweepstakes Period, a random drawing will be conducted to select winners from among all eligible entries received, as more fully set forth in the OFFICIAL RULES.  Entry in the Sweepstakes does not constitute entry into any other promotion, contest or sweepstakes.  By participating in the Sweepstakes, each entrant unconditionally accepts and agrees to comply with and abide by these Official Rules and the decisions of CineMovie TV, 2700 Arlington Ave. Ste. 101 Torrance, CA  90501 (“Sponsor”), which shall be final and binding in all respects.

FROZEN 2 DVD Sweepstakes is intended for participation only in the United States of America and shall be construed according to, and governed exclusively by, California law.  Do not participate in the Sweepstakes if you are not a legal resident of the United States physically located in the country on or  about January 1, 2019, or do not fall within the eligibility requirements set forth in the Official Rules below.

PROMOTION DESCRIPTION: FROZEN 2 DVD (“Sweepstakes”) begins on or about February 4, 2020 at 6:00 p.m. Eastern Time ("ET") and ends on February 15, 2020 at 11:59 p.m. ET (the "Sweepstakes Period").  At the end of the Sweepstakes Period, a random drawing will be conducted to select DVD winners from among all eligible entries received, as more fully set forth below.

WINNER'S LIST/OFFICIAL RULES:  To obtain a copy of any legally-required winner's list, send a self-addressed stamped envelope to: FROZEN 2 DVD Sweepstakes Winner's List, 2700 Arlington Ave. Ste. 101 Torrance, CA 90501.  All such requests must be received no later than six (6) weeks after the end of the Sweepstakes Period.  These Official Rules are available by sending an e-mail request to CineMovie.TV. This email address is being protected from spam bots, you need Javascript enabled to view it with "Official Rules Request" in the subject line.  Official Rules requests will not be granted after the end of the Sweepstakes Period.