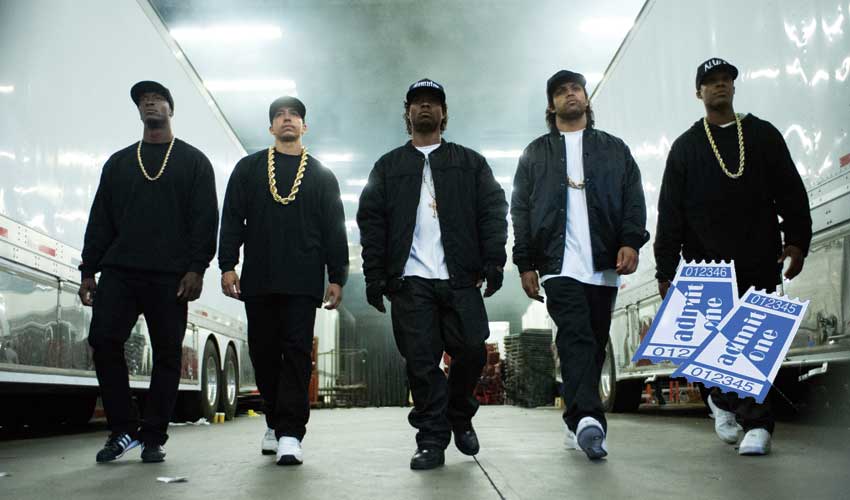 In 1987, five young men, using brutally honest rhymes and hardcore beats, put their frustration and anger about life in the most dangerous place in America into the most powerful weapon they had: their music.  Taking us back to where it all began, STRAIGHT OUTTA COMPTON tells the true story of how these cultural rebels—armed only with their lyrics, swagger, bravado and raw talent—stood up to the authorities that meant to keep them down and formed the world’s most dangerous group, N.W.A.  And as they spoke the truth that no one had before and exposed life in the hood, their voice ignited a social revolution that is still reverberating today.

STRAIGHT OUTTA COMPTON is in theaters nationwide on August 14.

To enter the STRAIGHT OUTTA COMPTON Ticket Giveaway Giveaway, click on the form below.

PROMOTION DESCRIPTION:  STRAIGHT OUTTA COMPTON Ticket Giveaway Giveaway (“Sweepstakes”) begins on or about August 2, 2015 at 6:00 p.m. Eastern Time ("ET") and ends on August 12, 2015 at 11:59 p.m. ET (the “Sweepstakes Period”).  At the end of the Sweepstakes Period, a random drawing will be conducted to select winners from among all eligible entries received, as more fully set forth in the OFFICIAL RULES.  Entry in the Sweepstakes does not constitute entry into any other promotion, contest or sweepstakes.  By participating in the Sweepstakes, each entrant unconditionally accepts and agrees to comply with and abide by these Official Rules and the decisions of CineMovie TV, 2700 Arlington Ave. Ste. 101 Torrance, CA  90501 (“Sponsor”), which shall be final and binding in all respects.