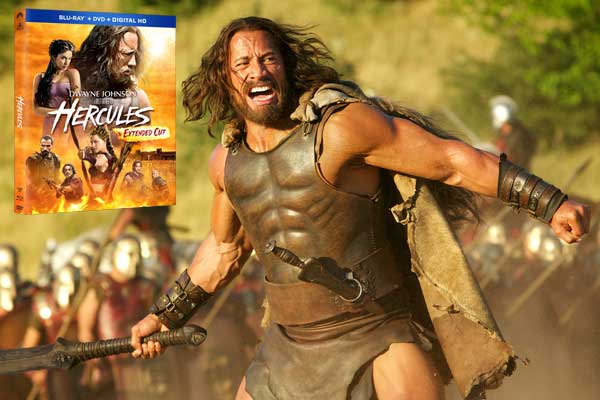 Dwayne Johnson is coming to Blu-ray, DVD and digital download as HERCULES November 4th, and three lucky winners will take one home a HERCULES Blu-ray/DVD Combo in our giveaway. Read on to find out how to enter to win.

Global superstar Dwayne Johnson delivers an unforgettable performance as the mighty Hercules in this thrilling story of strength, courage and heroism.  When a terrifying new enemy threatens the innocent, Hercules and his fearless team of warriors must lead their army in a battle against overwhelming odds. HERCULES boasts a sensational cast of acclaimed actors including Ian McShane (Pirates of the Caribbean: On Stranger Tides), Joseph Fiennes (TV’s “American Horror Story”), Rufus Sewell (The Illusionist), and John Hurt (Immortals).

The HERCULES Blu-ray 3D and Blu-ray Combo Packs with Digital HD include both the theatrical version of the film, as well as an extended cut (in 2D only) with exciting new action not seen in theaters.  The sets also boast over an hour of in-depth, behind-the-scenes special features including 15 deleted and extended scenes, interviews with the cast and crew, a look at the weapons employed by Hercules and his team, commentary featuring director  Brett Ratner and more.

For a chance to win a HERCULES Blu-ray/DVD Combo Pack, click on the form below.

PROMOTION DESCRIPTION:  HERCULES Blu-ray/DVD Combo (“Sweepstakes”) begins on or about October 30, 2014 at 6:00 p.m. Eastern Time ("ET") and ends on November 10, 2014 at 11:59 p.m. ET (the “Sweepstakes Period”).  At the end of the Sweepstakes Period, a random drawing will be conducted to select winners from among all eligible entries received, as more fully set forth in the OFFICIAL RULES.  Entry in the Sweepstakes does not constitute entry into any other promotion, contest or sweepstakes.  By participating in the Sweepstakes, each entrant unconditionally accepts and agrees to comply with and abide by these Official Rules and the decisions of CineMovie TV, 2700 Arlington Ave. Ste. 101 Torrance, CA  90501 (“Sponsor”), which shall be final and binding in all respects.