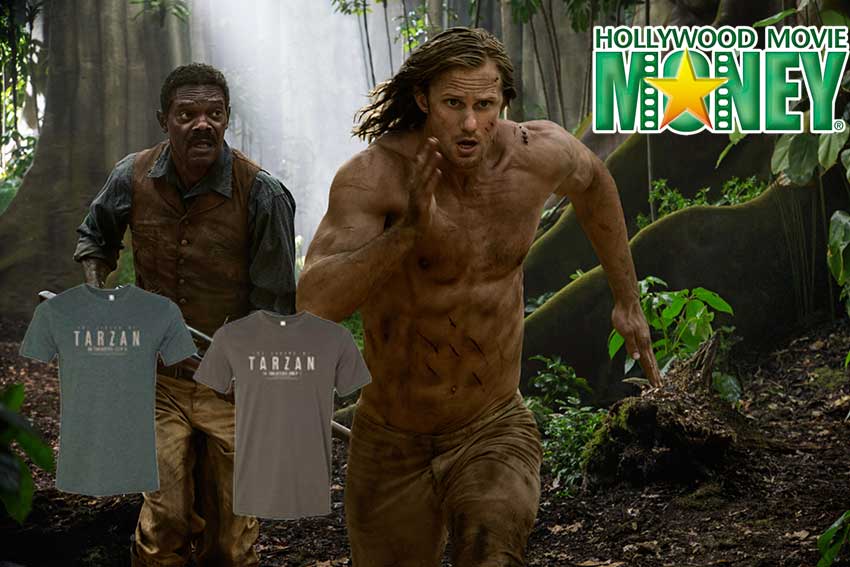 Tarzan doesn't wear shirts, but we're giving away THE LEGEND OF TARZAN movie t-shirts anyway to 5 winners including Hollywood Movie Money in CineMovie's THE LEGEND OF TARZAN Movie Prize Pack Giveaway. Read on to find out how you can win goodies from the movie starring Alexander Sarsgard, Samuel L. Jackson and Margot Robbie.

It has been years since the man once known as Tarzan (Skarsgård) left the jungles of Africa behind for a gentrified life as John Clayton, Lord Greystoke, with his beloved wife, Jane (Robbie) at his side. Now, he has been invited back to the Congo to serve as a trade emissary of Parliament, unaware that he is a pawn in a deadly convergence of greed and revenge, masterminded by the Belgian, Leon Rom (Waltz). But those behind the murderous plot have no idea what they are about to unleash.

THE LEGEND OF TARZAN opens July 1.

To enter THE LEGEND OF TARZAN Movie Prize Pack Giveaway, click on the form below.

PROMOTION DESCRIPTION: THE LEGEND OF TARZAN Movie Prize Pack Giveaway (“Sweepstakes”) begins on or about June 28, 2016 at 6:00 p.m. Eastern Time ("ET") and ends on July 2, 2016 at 11:59 p.m. ET (the “Sweepstakes Period”).  At the end of the Sweepstakes Period, a random drawing will be conducted to select winners from among all eligible entries received, as more fully set forth in the OFFICIAL RULES.  Entry in the Sweepstakes does not constitute entry into any other promotion, contest or sweepstakes.  By participating in the Sweepstakes, each entrant unconditionally accepts and agrees to comply with and abide by these Official Rules and the decisions of CineMovie TV, 2700 Arlington Ave. Ste. 101 Torrance, CA  90501 (“Sponsor”), which shall be final and binding in all respects.