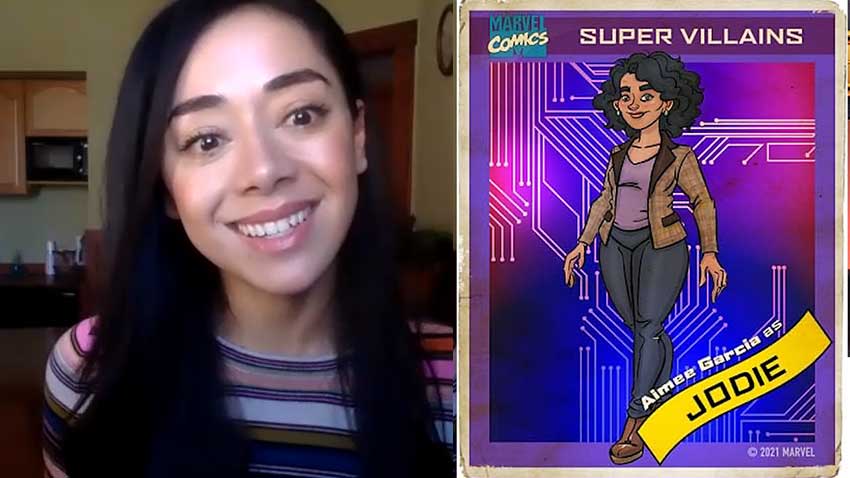 Aimee Garcia talks new animated role as a mommy blogger and the anti-hero's wife in Marvel's M.O.D.O.K., now streaming on Hulu, and becoming a supervillain in the series. The actress also reveals she asked the animators to add some curves to Jodie's design and they obliged. Garcia also discusses what she'll miss as Ella Lopez on Netflix's Lucifer when it ends, and we ask if she'll be reprising her role in the Dexter revival with Michael C. Hall.

Aside from starring as the voice of Jodie on M.O.D.O.K. (Hulu), Garcia's turn as forensic scientist Ella Lopez on Lucifer is coming to an end with season 6 airing on Netflix. She'll miss playing the Latina scientist because of what she has come to mean to her and others who see her as a role model for the underrepresented in the science community.

Garcia first broke through on Showtime's Dexter with Michael C. Hall as the anti-hero. Will she be reprising her role as Dexter's childs former babysitter?

Synopsis: The megalomaniacal super villain M.O.D.O.K. (Patton Oswalt) has long pursued his dream of one day conquering the world. But after years of setbacks and failures fighting the Earth’s mightiest heroes, M.O.D.O.K. has run his evil organization A.I.M. into the ground. Ousted as A.I.M.’s leader, while also dealing with his crumbling marriage and family life, the Mental Organism Designed Only for Killing is set to confront his greatest challenge yet: a midlife crisis... THAT WILL SHAKE THE UNIVERSE TO ITS CORE!