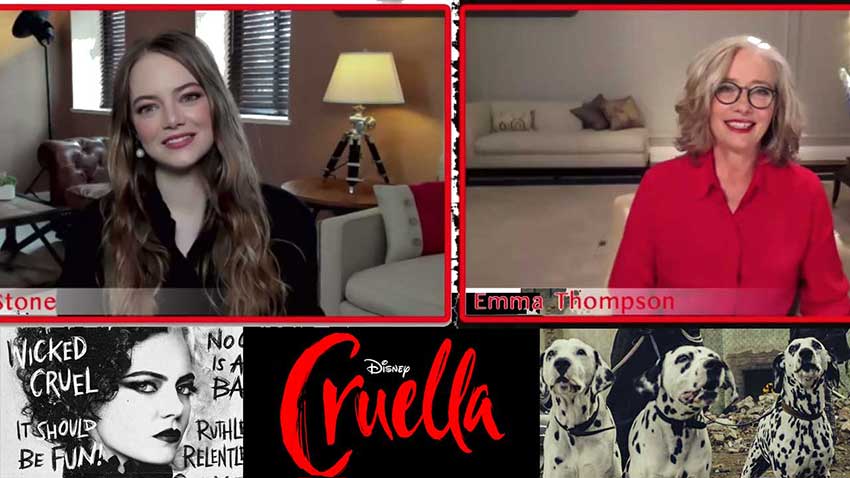 Aside from the costumes, the dog steal the show in Disney's CRUELLA starring Emma Stone and Emma Thompson. The actresses talk about their well-behaved canine costars Winky and the dalmations who stayed on their mark on set the whole time.

CRUELLA is an origins story for Disney villain Cruella deVil from 101 DALMATIONS. In the movie, there are various dogs. Thompson's Baroness' pets are three dalmations, and the actress says they were good costars staying on their mark. Stone worked with a dog that belonged to her Estella (before she became Cruella) character named Buddy. She calls him the sweetest dog she's ever met. Then there was the scene stealer, Winky played by Bluebell who's part of Cruella's crew and the most resourceful one.

Below listen to the actress' fun banter about working with their animal costars, or read the script below from the press conference held earlier this month. CRUELLA opens in movie theaters May 28, and on Disney+ Premier Access.

EMMA STONE: Yeah. The dogs are-there's a quite a bit of the-the dog CGI, but those dogs were always on set. There were a lot of-as many scenes as we could possibly have those dogs be comfortable, they were in, which was amazing.

EMMA THOMPSON: Yeah. And they were great and they were very sweet. So there's the-they have CGI'd them to be a bit-a bit nasty.

EMMA THOMPSON: Um, because they were such sweet dogs. They were so nice, and they worked so hard.

EMMA THOMPSON: And they had little crosses, and they-we sent back to their marks like little-little canine actors and they would just go back and stand on their marks and wait, and then get a little treat. [OVERLAP]

EMMA STONE: [OVERLAP] Estella's dog, Buddy, whose real name is Bobby, was-I-I genuinely think he was the cutest and sweetest dog I had ever known in my life, and I've got a lot of dogs. So that's saying something. [OVERLAP]

GRAE: We actually have a shout out to Bluebell, AKA Wink as well.

EMMA STONE: [OVERLAP] I've been jealous of Wink since day one, and I'll say it right here.

EMMA STONE: We saw Bluebell and she was like, "You bitch." But that means female dog.

EMMA THOMPSON: Yeah. I tried to get Wink fired. I told stories. I said he'd come and widdled [PH] on one of my costumes, and nobody believed me. Um, yeah, they just knew I was lying and that it was just a vicious attempt to get rid of this dog that was, frankly, upstaging me and getting in my light.

GRAE: [LAUGH] You found the dog to be an obstacle. I respect that. And...

EMMA THOMPSON: The dog was an obstacle.