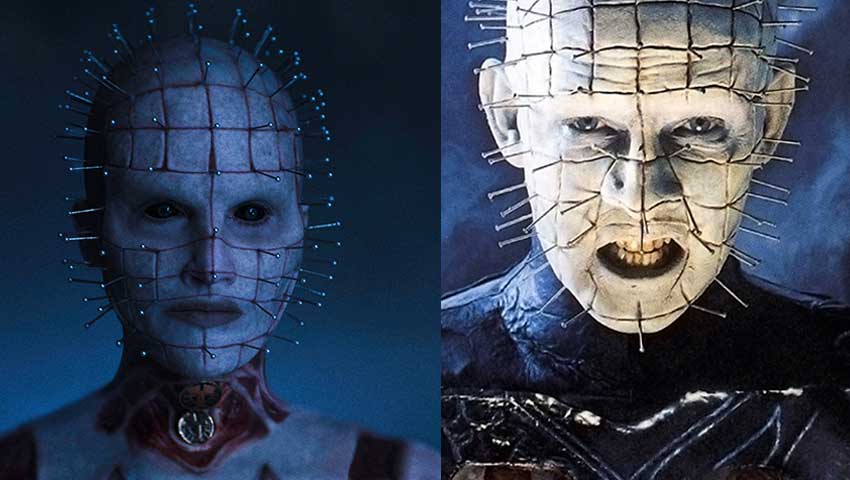 Clive Barker’s Cenobites return to haunt our dreams in all-new HELLRAISER, streaming on Hulu as part of the streamer’s annual “Huluween” content. The new Pinhead, played by Jamie Clayton,  certainly feels the pressure to live up to the OG Pinhead portrayed by Doug Bradley but she reveals she didn't want to emulate his performance but come up with something different.

HELLRAISER reboots the Clive Barker franchise with all new Cenobites, story and characters. Jamie Clayton (“The L Word: Generation Q,” “Sense8”) leads the gang of dimensional S&M-looking demon sadists who enjoy tearing your soul apart. “This is a new HELLRAISER story. It's not a remake of the original films, necessarily,” according to director David Bruckner. “It does harken back to them quite a bit.”

In Clive Barker’s novel “The Hellbound Heart,” on which the films are based, the Hell Priest was described as an androgynous demon with a feminine voice. However, for the original 1987 film, Barker cast English actor Doug Bradley to play the central Cenobite despite not fitting the novel’s description.

In the David S. Goyer reboot under the direction of Bruckner (THE NIGHT HOUSE, Creepshow), Barker’s character from the novel takes shape in a frightening manner with Clayton behind the sadistic costume.

“I really tried to do something uniquely my own,” Clayton stated at a press conference for the movie. “I'm hoping that it's something really unique. I mean, Doug is incredible. But I didn't want to be, you know, sort of compared or, have people be like, oh, you know, she nicked that from him…. So, like, it's a whole new thing. So just, you know, Doug is amazing. No one could ever, ever, ever, ever, [LAUGH] like, do what he did. No. Love you, Doug.” [MAKES KISSING NOISE]

Clayton worked closely with Bruckner through various Zoom sessions to come up with a distinctive approach to playing the fetish-looking Cenobite. She combined his vision with her “bits and bobs,” as she states it, to create a “meshing of those things.”

Catch Clayton’s hell-raising performance in HELLRAISER when it premieres on Hulu on October 7.