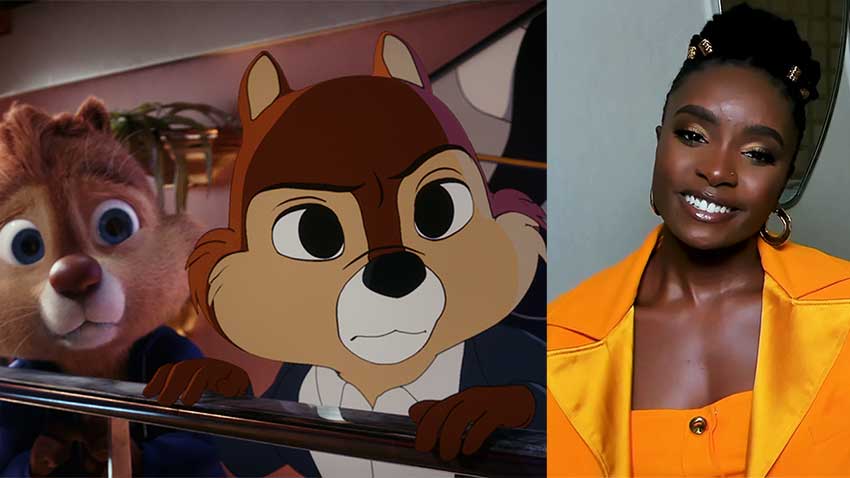 Kiki Layne stars opposite the famous chipmunk brothers in the Disney+ movie, CHIP 'N DALE; RESCUE RANGERS, and the actress is currently in training to return as Nile's in the Netflix sequel, THE OLD GUARD with Charlize Theron and Chiwetel Ejiofor. The actress discusses both roles during our virtual sitdown.

Layne is one of the only humans in CHIP 'N DALE: RESCUE RANGERS surrounded by 2D drawn and CGI characters. The Disney+ movie premiering May 20 stars the voices of John Mulaney as Chip and Andy Samberg as Dale along with an impressive voice cast that includes Eric Bana, Keegan-Michael Key, Tim Robinson, Seth Rogen , J.K. Simmons, just to name a few.

Together with Chip and Dale, Layne's detective character investigates the disappearance of classic toons in a bootleg ring. Aside from the chipmunk brothers, dozens of classic and modern animated characters make an appearance in the Disney+ movie.

MORE ABOUT THE MOVIE

In CHIP 'N DALE; RESCUE RANGERS, Chip and Dale are living amongst cartoons and humans in modern-day Los Angeles, but their lives are quite different now. It has been decades since their successful television series was canceled, and Chip (voice of Mulaney) has succumbed to a life of suburban domesticity as an insurance salesman. Dale (voice of Sandberg), meanwhile, has had CGI surgery and works the nostalgia convention circuit, desperate to relive his glory days. When a former castmate mysteriously disappears, Chip and Dale must repair their broken friendship and take on their Rescue Rangers detective personas once again to save their friend’s life.

The CHIP 'N DALE; RESCUE RANGERS, Original Soundtrack with score by composer Brian Tyler will be released by Walt Disney Records on May 20.