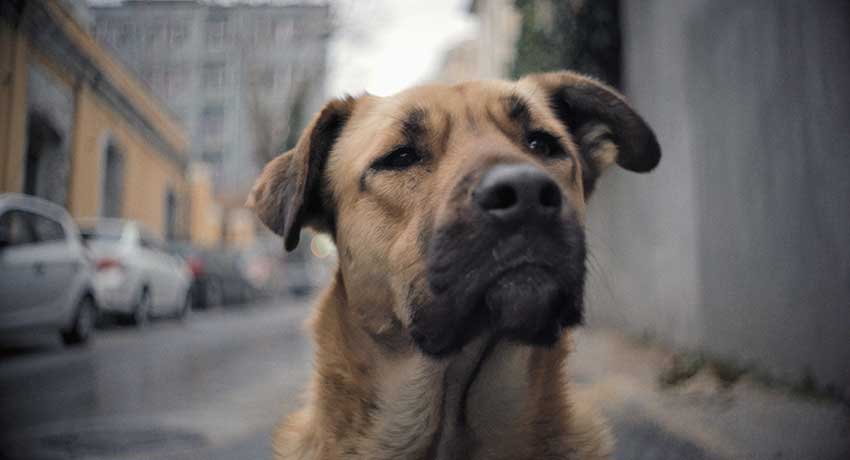 Director Elizabeth Lo took to the streets of Instanbul, Turkey to follow stray dogs who are free to roam cities and rely on the generosity of humans for food. Zeytin is the star of the film as she goes about her business while Elizabeth follows closely behind. We talked to the director about how she went about shooting a dog in motion while following close behind.

The people of Turkey protested the killing of strag pets, so by law the government banned the killing of stray animals. Canines roam free around the cities finding food in trash and from the generosity of humans. Elizabeth Lo followed a group of dogs but mainly followed Zeytin, a large dog who didn't mind the director following him wherever he went throughout the city. We chatted with the filmmaker about the challenges of making a movie with no dialogue or talking animals.

STRAY is available to watch everywhere.

STRAY explores what it means to live as a being without status or security, following three #strays as they embark on inconspicuous journeys through Turkish society. Zeytin, fiercely independent, embarks on adventures through the city at night; Nazar, nurturing and protective, easily befriends the humans around her; while Kartal, a shy puppy living on the outskirts of a construction site, finds companions in the security guards who care for her. The strays’ disparate lives intersect when they each form intimate bonds with a group of young Syrians with whom they share the streets. Director Elizabeth Lo’s award-winning film is a critical observation of human civilization through the unfamiliar gaze of #dogs and a sensory voyage into new ways of seeing.