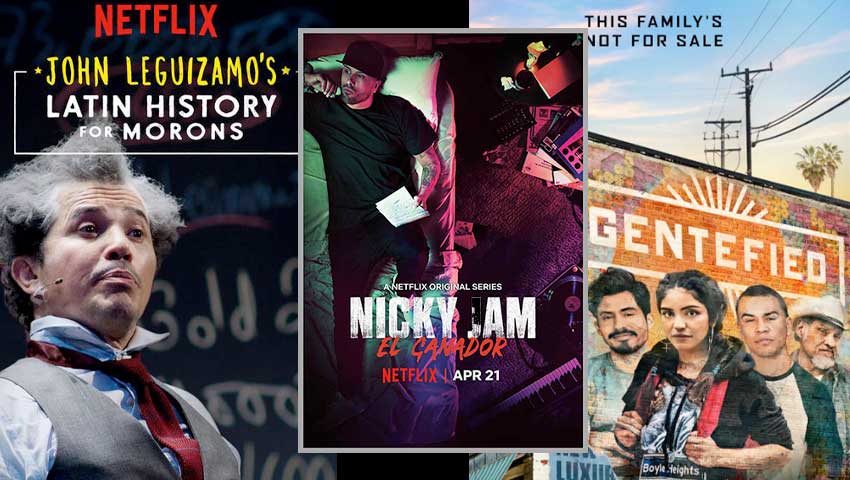 Latinos are not a homogenous group, yet when media celebrates Hispanic Heritage Month we’re lumped into one category. Rotten Tomatoes recently published a list of movies celebrating Hispanic Heritage Month, but their list consisted of all Spanish language films, and left out American-based stories. The bicultural experience in America is different from their parent's homeland no matter your race. The bicultural Latino stories do exist and Netflix is the best media company putting out those stories. Below is a list of programming that captures that experience in America.

Of all the streaming services or media companies, Netflix’s library is by far the best representation of the Hispanic and Latin movies and series. Many of the new series also tackle LGBTQ+ issues.

You'll find shows and films from Latin America and Spain but they also invest in American stories like the ones listed below.

One Day At A Time

Norman Lear's "One Day At A Time" was reimagined with a Cuban-American family starring Justin Machado, Rita Moreno, Isabella Gomez and others. You can watch the first three seasons on Netflix, but after cancelling the show, CBS and Pop picked up the fourth season for CBS.

It was one of the first series representing a Latino family on Netflix which garnered critical praise, but sadly none that translated to Emmy nominations for the cast or showrunner Gloria Calderon Kellett.

From creators Marvin Lemus, Linda Yvette Chavez, and producer/director America Ferrera, "Gentefied" is set in Boyle Heights around a Mexican-American family struggling to survive the changing environment. A taco shop is on the verge of closing, and three grown grandchildren pitch in to help their abuelo make rent as the area is being taken over for gentrification.

The series truly captures the bicultural scene and language with tons of Mexican and American references.

On My Block
This Netflix series is a very powerful example of inner city youth struggling to survive and the lack of opportunities for a better future. It sounds dire as written, but this show is actually hilarious with funny characters and a plot that may remind you of the GOONIES but in the hood.

The series follows four high school friends (Sierra Capri, Jason Genao, Brett Gray, Diego Tinoco) living in South Central Los Angeles. They're highly intelligent, and dream of going off to college to make something of themselves. First, however, they must to survive their violent environment and keep one of their friends from joining a gang. The dramedy portrays black, Latino and Afro-Latino from all aspects of life in the hood.

The show is a hit with young adults but it hasn't cracked the mainstream and the media is certainly not talking about this very relevant show.

Mr. Iglesias
Gabriel "Fluffy" Iglesias stars as a teacher at a high school who uses humor to get through to his ethnically-diverse group of students, but sometimes they teach him a life lesson or two.

Fluffy pays homage to teachers while tackling real life issues with over-the-top humor. His inspiration comes from the teacher who inspired him to not be just be another negative statistic in the hood.

Nicky Jam’s rag to riches story is told in an authorized bio-series, “Nicky Jam: El Ganador.” The 13-episode series stars Nicky Jam as himself narrating the story while a young actor plays his younger self recreating the events that fueled his rise to fame from a rough upbringing and drug addiction.

There have been many movies about inspirational teachers, but this one may the first one that didn't have a white savior behind the message.

Side Note: Check out CRITICAL THINKING starring John Leguizamo as real-life teacher Mario Martinez who led his Miami Jackson High School chess team to win the national championship. It was the first time an inner city school took the win. It's now streaming everywhere (not on Netflix).

Victor sets his sights on a girl who seems beyond his reach. The very talented Melonie Diaz and Victor Rasuk ("The Baker and the Beauty") star.

Comedians often use their life struggles as the basis for their acts. Not only do you get a good laugh out of it but it also makes you feel like you were not alone in your experience. Cristela Alonzo, John Leguizamo, Gabriel "Fluffy" Iglesias, Felipe Esparza and George Lopez are bicultural Latinos that we can relate to, and at the same time poke fun at our cultural differences.

Here are the comedy specials to add to your watchlist.

John Leguizamo: "Latin History for Fuckin' Morons"
Latinos and other people of color have been sidelined in history books so Leguizamo changes the narrative for some ugly truth with laughter.

George Lopez: "We’ll Do It For Half"

Gabriel Iglesias: I’m Sorry For What I Said When I Was Hungry