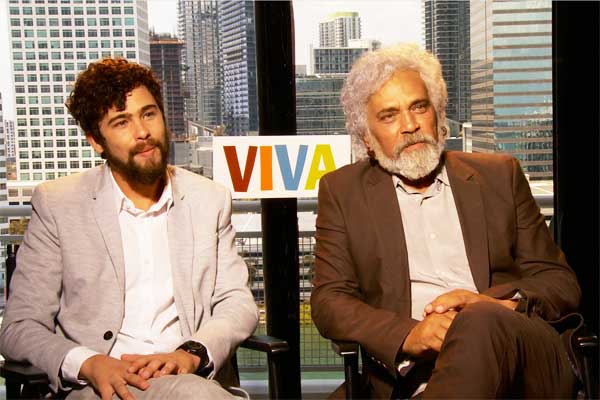 Hector Medina and Luis Alberto Garcia (Juan of the Dead, Love by Mistake, El Elefante y la Bicicleta, Clandestinos) sat down to talk to CineMovie in Miami about their new film VIVA, the acclaimed Irish/Cuban production film shot in Cuba about a young man dreaming to one day become a drag performer. Watch the Spanish interview.

Currently playing in select movie theaters, VIVA, stars Hector Medina as Jesus, a young hairdresser working at a Havana nightclub that showcases drag performers, who dreams of being a performer himself. Encourage by his mentor, Mama (Luis Alberto Garcia), Jesus finally gets his chance to take the stage. But when his estranged dad Angel (Jorge Perugorria) abruptly reenters his life, his world is quickly turned upside down. As father and son clash over their opposing expectations of each other, VIVA becomes a love story as the men struggle to understand one another and reconcile as a family.

Michael Angelo Gonzalez talks to the actors about the film which was a hit at the Telluride and Sundance Film Festivals in 2015, and was Ireland’s official entry for the Best Foreign Film Academy Award this year.