THE BOOK OF LIFE A Love Letter To Mexico? 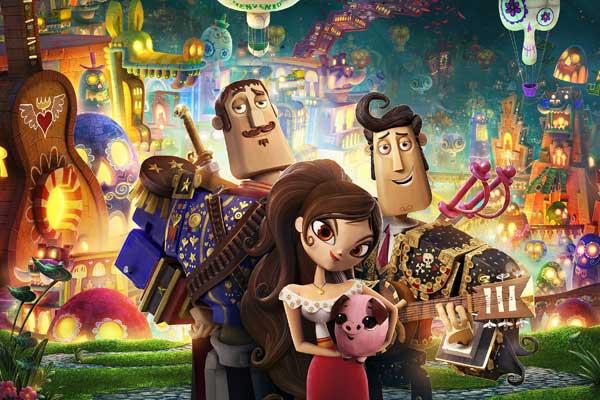 THE BOOK OF LIFE opens this weekend, and it marks an important step towards representing Latinos in Hollywood. There hasn’t been this many Latinos one Hollywood film since… well it just hasn’t happened. THE BOOK OF LIFE director Jorge Gutierrez and producer/co-writer Guillermo del Toro talked about their passion project back in July when CineMovie got a sneak peek at FOX Studios.

Guillermo del Toro explains how he got involved with the film by Jorge Gutierrez, and why it’s a love letter to all things Mexican. Back in July, Del Toro introduced first time director Jorge Gutierrez. Del Toro, being one of the busiest man in Hollywood didn't really want to take on another project having a back log of material. According to Jorge who started on the project fourteen years ago, he was asked who would be your dream producer.

"I didn't even think about it. I just yelled Guillermo del Toro! What other director goes and helps first-time filmmakers. He's like the mother Teresa of film."

Guillermo said that Jorge was so insistent that he finally gave in when he said, "I'm a fat guy too!" But Guillermo fell in love with the puppets Jorge brought during his pitch. As a producer Guillermo fixates on a few things, he saw that the images were so pure and unique. "When I saw the world I knew it was so unique and so powerful and it embodied the complexity of the culture it was trying to represent".

For Jorge, this is a very personal film, "the analogy I give is that there is a cook book with my families recipes and they're all in there, every single one. All these stories are based on real things that happened to my family."

It's unique and authentic to Latin America but it's really a film for everybody. Jorge grew up in Tijuana so he saw the influx of American culture going south to Mexico and Mexican culture going north to America.  "It's a love letter to where I'm from."

Stylistically it's something we never seen before, Jorge's wife Sandra designed all the female characters while Jorge did all the males. The have such a love for Day of the Dead that they even got married on it. The characters are made out of wood to give the effect that artisans made them.

The story begins in a museum where the tour guide, voiced by Christina Applegate, takes a group of rowdy kids to a museum. The kids don't want to go into the museum, they can care less about the history of the world. So the tour guide takes them into a magical room and introduces them into the world of The Book of Life. It's the history of the world where the kids learn about Day of the Dead and the mythology behind that day. We get introduced to two God like creatures, one of love La Muerte (Kate del Castillo) and Xibalba (Ron Perlman), one that is evil. It is also where we meet the main characters Manolo (Diego Luna) and Joaquin (Channing Tatum) who are both in love with the same girl Maria (Zoe Saldana). The two Gods have a wager, each choosing a boy to see which one will marry Maria.

Jorge thought Channing Tatum would never say yes. "He took me aside and said Jorge you know I'm not Mexican." and we laughed and he was in. I told him he's playing the Captain Latin America, and he swore to me he would grow a mustache by the time the premiere came around." Other actors involved are Ice Cube who plays the candle maker, Cheech Marin, comedian Gabriel Iglesias, Danny Trejo, and Hector Elizondo.

In this next clip we see Manolo and Joaquin all grown up. Manolo comes from a long line of bull fighters, but he really doesn't want to be a bull fighter he wants to play the guitar. Joaquin is the opposite. He comes from a long line of military heroes and he's more then happy to become the next hero in line.  In this scene we see Manolo playing his guitar while singing "I Will Wait" by Mumford and Sons but it's the Ranchera version which was produced by Grammy Award winning producer Gustavo Santaolalla. It's also the first time we hear Diego Luna sing, "Diego has never sang in a movie before. He took lessons and did his best, music is a big part of our movie." Many artists allowed Jorge to use their music from Radio Head to Elvis and Rod Stewart.

In next scene, we see both Manolo and Joaquin fighting for Maria's affection. Maria has just returned from Europe and the whole town is in awe of her. As we see Manolo unable to kill the bull and thus shame his family he leaves the bull ring playing his guitar to Radiohead's "Creep." According to Jorge, "this was the first song that was added to the film and when they were approached, Radiohead immediately said yes!"

As Manolo and Joaquin are at each others throats trying to win over Maria, Manolo finally decides it is time to propose. Xibalba realizes he's going to loose the wager so he tricks Manolo into going to the land of the dead thinking that Maria has also gone there and offers him a chance to be reunited with her. While in the underworld, the world is colorful, vibrate and full of music and festivities and crazy characters. We also hear Guillermo's cameo in the film screaming "Hi honey!" Once Manolo finds out that he's been tricked, he is helped by his ancestors and the Candle Maker (Ice Cube) to get out of the world of the dead. What's different about Manolo is that he has the ability to write his own story and change his destiny. But in the end in order to win, Manolo will have to face his greatest fear which is accepting himself.

In the end this has been a life long journey for both Guillermo and Jorge. Jorge "robbed" five years of Guillermo's life and "he has become the son I've never had and he's way too large to accommodate any birth canal so I'm grateful he's not really mine."

Guillermo says he tries to direct and produce movies that no one else would quite do the same way or not at all.

"When I see something that I love you have to protect the universe of that movie, that is unique visually. It doesn't feel fragmented, where Jorge took a piece of a successful movie here and a successful movie there. If you are going to create a dish and film is a world of flavors, the worst thing that is happening to film is that it's becoming uniform in itself into a single flavor."

The film represents Mexico not just as a folkloric memory but as a place that has influences of punk, rock n roll, modernity and it becomes what we know is Mexico.

THE BOOK OF LIFE  is in theaters October 17th.