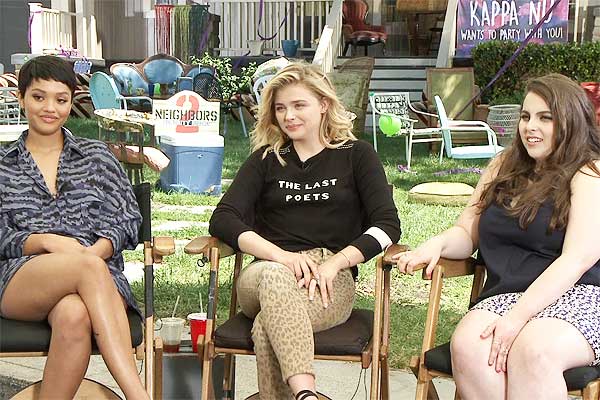 Zac Efron reprises his role as Teddy in the NEIGHBORS sequel, and a more ripped Efron puts his abs on display during a scene which called for the girls to lose their minds including their stash of pot. During a press conference with scene stealers Chloe Grace Moretz, Kiersey Clemons (Dope) and Beanie Feldstein, who play sorority sisters in NEIGHBORS 2: SORORITY RISING, the actresses pointed out that television press repeatedly asked about if they lusted after their co-star while on the set. In the interview below, Beanie Feldstein states they are professionals, and that sort of behavior would be uncalled for during production. Luckily no one in our press conference resorted to that question.

Listen to the women describe Efron’s personality and why they appreciated the question about the man and not the bod. That’s not to say Kiersey Clemons is not an admirer of the beautiful man that is Zac Efron.