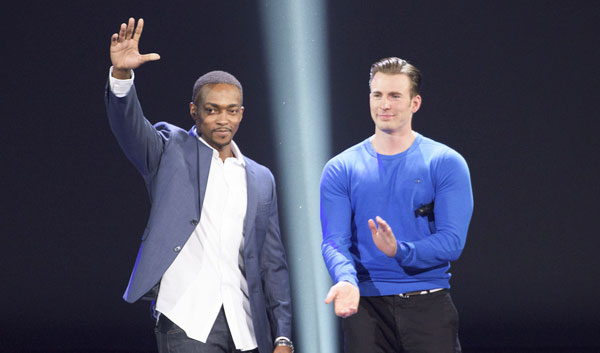 Chris Evans and Anthony Mackie flew from the Germany set of CAPTAIN AMERICA: CIVIL WAR to Disney's D23 Expo Saturday to present footage from the Marvel film, while Benedict Cumberbatch sent a special message to fans from London talking about his excitement in playing Doctor Strange.  Watch what they had to say from the D23 panel in the video below.

Marvel head Kevin Feige took the stage at D23, and presented MCU's Phase 3 film slate which includes DOCTOR STRANGE (November 4, 2016) and CAPTAIN AMERICA: CIVIL WAR (May 6, 2016). First up, DOCTOR STRANGE is currently in pre-production in London with Scott Derrickson (Sinister, The Exorcism) at the helm. Feige confirmed Tilda Swinton is on board to play "The Ancient One" and Chiwetel Ejofor as Baron Mordo.

The star Benedict Cumberbatch sent a special greeting from London where he's performing in a play, and couldn't make the trip to Los Angeles for the special Disney fan event. In the video message, the always funny Cumberbatch saluted the crowd with a Spock greeting, and then apologized, "Sorry wrong movie." He expressed his excitement in playing the comic book superhero.

Afterwards, Feige presented concept art of the movie including Cumberbatch as Doctor Strange, and of course the Sherlock Holmes actor looked very regal with his grey streaks. Based on the concept art shown at the D23 Live Action panel, expect massive destruction in this superhero movie.

Next Feige brought out Chris Evans and Anthony Mackie who were jet-lagged from their flight from the Germany set of CAPTAIN AMERICA: CIVIL WAR where they are wrapping up production in a week.  The two CIVIL WAR stars joked that they edited together footage from the Marvel movie for the D23 crowd on iMovie on the flight over, and presented three minutes of an action packed preview, revealing Crossbones for the first time fighting Captain America and all sorts of fun action. The movie footage is not included in the video below, but Evans and Mackie's appearance at D23 is hilarious.