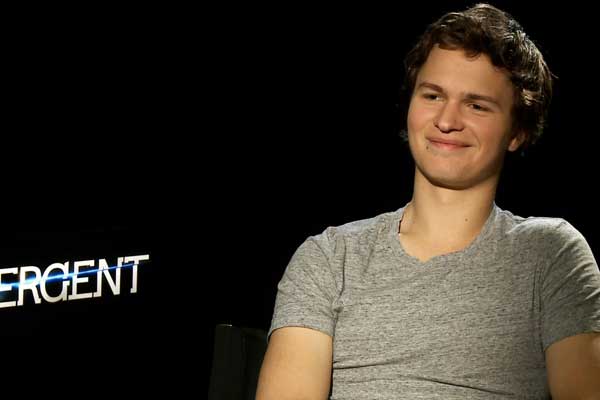 The young star of DIVERGENT says working with his co-star Kate Winslet was a special experience because of her generosity on set and off. Ansel Elgort is also spilling the beans on playing Shailene Woodley's lover in The Fault in Our Stars.

DIVERGENT marks Ansel Elgort second acting gig for the young actor after making his debut in the Carrie remake in 2013. With only two films under his belt, Elgort is already moving into leading man territory with two high-profile films. He's starring as Shailene Woodley's love interest in The Fault of Our Stars based on the best-selling book, and he's currently in production for Jason Reitman's new comedy, Men, Women & Children.

The up-and-coming actor sat down with CineMovie's Sue Evelyn Gil to discuss his new movie based on the popular young adult novel in which he plays Tris' (Woodley) brother. Going from playing Woodley's brother to lover in The Fault in Our Stars didn't phase the actor, since Woodley went for a short pixie cut for that role. He jokes that if she looked like her DIVERGENT character, then he would be weirded out.

DIVERGENT also stars Kate Winslet as the villain, but she was nothing like the DIVERGENT antogonist on set. "She's a freakin' movie star" he says, yet she's apologizing for stepping on his lines. He found it surprising that someone of her caliber was spending time rehearsing and hanging with the cast rather than hiding out in her trailer. Woodley also mentioned at a press conference in Los Angeles that Winslet often mingled with the cast and crew rarely acting like the A-lister that she is.

For more with the DIVERGENT star, watch the video interview below.