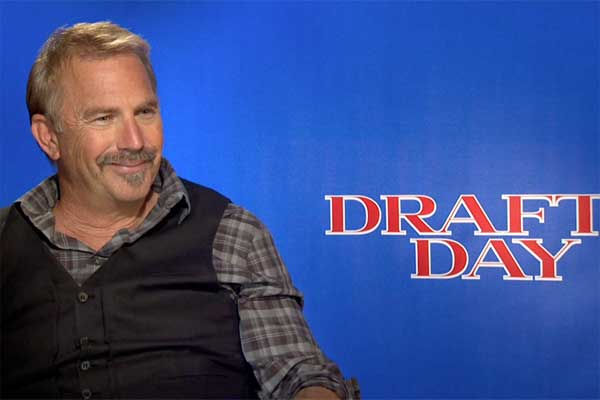 Acting and directing for Kevin Costner isn’t just a day job, but a passion that started as a child when he learned valuable lessons from movies like Giant starring Rock Hudson and Elizabeth Taylor. The DRAFT DAY star often uses the medium to tell powerful stories including in his next film which deals with racism in America.

Kevin Costner (Fields of Dreams, Tin Cup, Bull Durham) stars in yet another movie revolving around sports in DRAFT DAY with Jennifer Garner and Dennis Leary. It’s no surprise since the Lynwood, CA native grew up with sports as a football, baseball and basketball player during his youth and in college. However at a recent press event with the actor, Costner says to look beyond the setting and see that it's really not about football but the "age-old thing about people who love each other but can't seem to get it together."

That's how he approaches movies. It's not just a form of entertainment, but an outlet for human interaction.

"Movies defined who I should be as a person. That may sound funny but there's a lot for us to learn at the movies."

He credits the classic 1956 movie Giant as being the most influential film he saw as a boy. The Rock Hudson, James Dean and Elizabeth Taylor movie left quite an impression on the actor. He saw the Rock Hudson character beaten and on the floor bleeding at the end of the movie which he thought never happens to the hero of the movie. "The leading man doesn't lose or gets beat," said the 59 year old actor. In the movie, Hudson's character, a Texan cattle rancher, starts out racist against his son's girlfriend who is Chicana, but by the end he defends his son's new family when they are refused service at a Texas diner albeit on the floor bleeding and hurt. When Elizabeth Taylor picks him off his feet and tells him, "you never stood taller."  That was a defining moment for Costner.

"And I thought to myself, that's who I want to be. The guy on the floor, and he lost."

Costner goes on to explain that motto has helped him in his career as well. He's never been afraid of things not working out and he uses his instincts to guide him. "My instincts were wildly at play late in my career," he says during his long speech. His instincts have included taking risks and putting up his own money and home to the make movies he wants including his latest film, Black & White which he stars and produces.

Black & White was independently produced since the studios didn't want to make it. He set out to make a movie that talks about racism in America that he describes as "funny, sad and poignant." He says we have a difficult time talking about racism and there's an important scene at the end of Black & White that sums it up.

"We're not going anywhere in this world. We are all in it together and we have to learn to talk to each other."

He describes the experience of making it as a "rock that I have to push up hill to make it," and adds that his new film reminds him of Field of Dreams. He hopes Black & White will be as important as that film or his Dances with Wolves. He's looking forward to everyone seeing it.

Kevin Costner also points out that he "lives off intuition and passion" and that's evident when talking about movies such as DRAFT DAY and his upcoming film Black & White which opens later in 2014.