Interview: Production on 'No Manches Frida 2' Was No Walk On The Beach For Cast and Crew 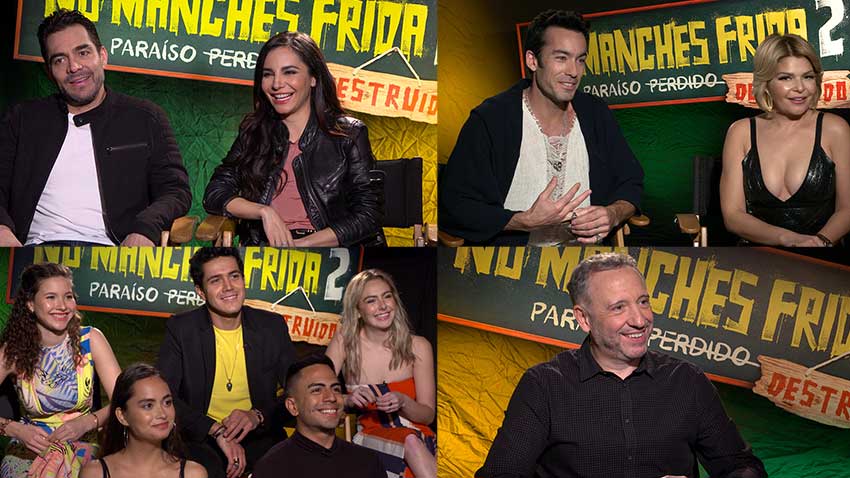 NO MANCHES FRIDA was one of Mexico's most successful films ever, and director Nacho G. Velilla, Martha Higareda and Omar Chaparro return with a sequel to the Spanish comedy, NO MANCHES FRIDA 2 along with their new co-stars Itati Cantoral and Aaron Diaz. The sequel takes place at a Mexican beach resort, but the production of the film was not a walk on the beach with extreme heat and hot sand under their bare feet. CineMovie sat down with the stars and director to talk about their days at the beach under the hot sun. Watch the Spanglish interview below.

Shooting at a Mexican beach resort sounds like an ideal setting, but for the stars and crew of NO MANCHES FRIDA 2, they had their work cut out for them. Watch below as Martha, Omar, Itati, Aaron, the actors playing the students (Mario Moran, Regina Pavon, Memo Dorantes, Karen Furlong, Carla Adell) and the director joke about their time in the blazing sun but also the fun times with the cast.

In NO MANCHES FRIDA 2, Zequi (Chaparro) and Lucy's (Higareda) wedding is a disaster when Lucy calls off the ceremony. Zequi desperately wants to win her back, and he gets his chance when the school enters a tournament at a beach resort to save the school. His plan is complicated when Lucy runs into her old flame who is a couch for a competing school, and his rowdy students are less than stellar at the competition.

NO MANCHES FRIDA 2 is in movie theaters March 15.