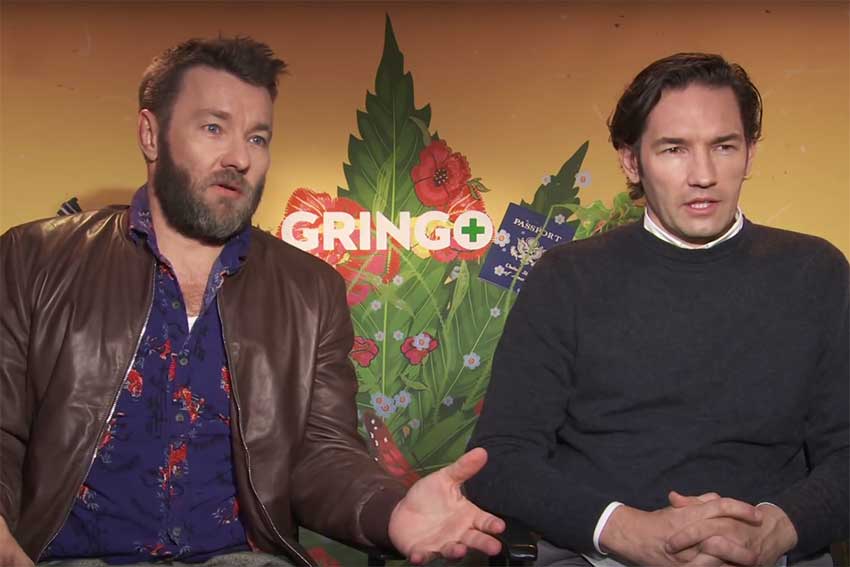 Brothers Joel and Nash Edgerton are best of friends and collaborators on many film projects. The Aussie siblings team up once again in the dark action comedy, GRINGO with Nash in the director’s seat bossing his little brother around. The two describe their working relationship, and why the director’s goal was not to offend his Mexican friends with the movie.

Joel Edgerton also stars with David Oyelowo and Charlize Theron in GRINGO.  Oyelowo is the gringo everyone is looking for when Harold disappears in Mexico after a business trip. He is at the mercy of his corrupt and back-stabbing American colleagues, a local drug lord and a morally conflicted black-ops mercenary. Harold must survive by playing dirty like the rest of them.

The GRINGO trailer gives you the impression that Mexico will be portrayed in the usual stereotypical fashion. CineMovie talked to Joel and Nash Edgerton where we addressed that issue along with discussing the fun nature of the quirky comedy that plays like a morality tale.

CineMovie: I went into the film a little skeptical because I thought, ‘Oh no, another negative view of Mexico.’ But actually, I was pleasantly surprised. You guys did a really good job at showing the real...

Nash: We love Mexico, so that was our aim. My aim was not to disappoint my Mexican friends.

CineMovie: Well, you didn’t. It was good. So, it basically means the whole story is about the ugly American. 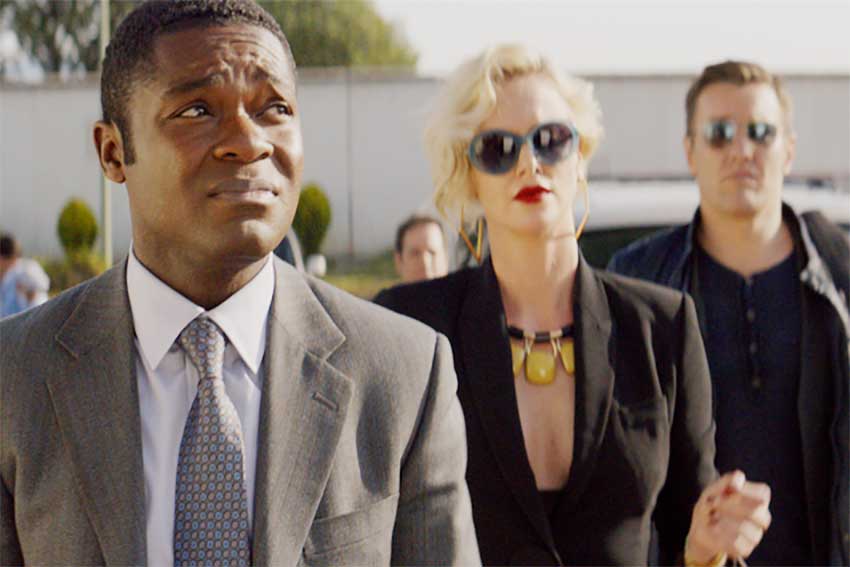 CineMovie: Yes, especially right now. I read that it was actually David's idea to make his character an immigrant, is that right?

Nash: It was. I met with David about the movie, and we just got off on so well, and half way through dinner, I knew I wanted to cast him. And then maybe three or four weeks later he invited me around to his house, which proposed the idea to make Harold a Nigerian immigrant. And he told me about his father's experience as an immigrant, a Nigerian immigrant in the UK. And then he started playing out of one of the scenes, and it just felt so inspired and made me feel so warm inside, and I thought I really want to see this version of the movie.

CineMovie: It was a nice touch because you see these Americans acting like fools and being greedy, and this immigrant, he is an idealistic person, so it's kind of reflective of what really goes on and what's going on right now, especially in the current climate.

Nash: Yes. The script always has a good-natured character at the center these kind of greedy people. But I think it just highlighted those elements. And I think a lot of immigrants have that experience of going to another country, in this case with the American dream in mind. Our mother was a Dutch immigrant coming to Australia. David’s parents were Nigerian immigrants going to the UK. And I think there is an optimism that comes with moving to another country. And sometimes people are treated, you know… because English is not their first language they get treated like they are a lesser intelligence, which is never the case.

CineMovie: And for Joel playing this ugly American, what was it like for you probably putting together a couple of characters that we know in real life, right?

Joel: For me to be able to channel my inner corporate jerk, I knew it was going to be fun, but it was surprisingly easy to go the work each day started and be such an unlikeable person. But to always be thinking that I was kind of at the center of my own movie, that Richard Rusk…  he's such a righteous, ignorant person. I loved it. I had a great time.

CineMovie: Was it liberating being able just to say whatever is on your mind or being this bad guy?

Joel: That's exactly what it is. I had the same liberating feeling when I was filming The Great Gatsby because you can be on set and sort of still being in character and get away with saying anything you want, and it's completely liberating, you’ve nailed it.

CineMovie: And as far as being bothers, did you guys get along as kids and you were able to work together? How is the chemistry there?

Nash: We're like best of friends. But as kids, for a few moments we were trying to hit each other with sticks when we were much younger. But we've been very good friends for a long time.

Joel: We used to punch out. But that's what siblings do when they're young. The whole work flow is easy now because we have such a good relationship. 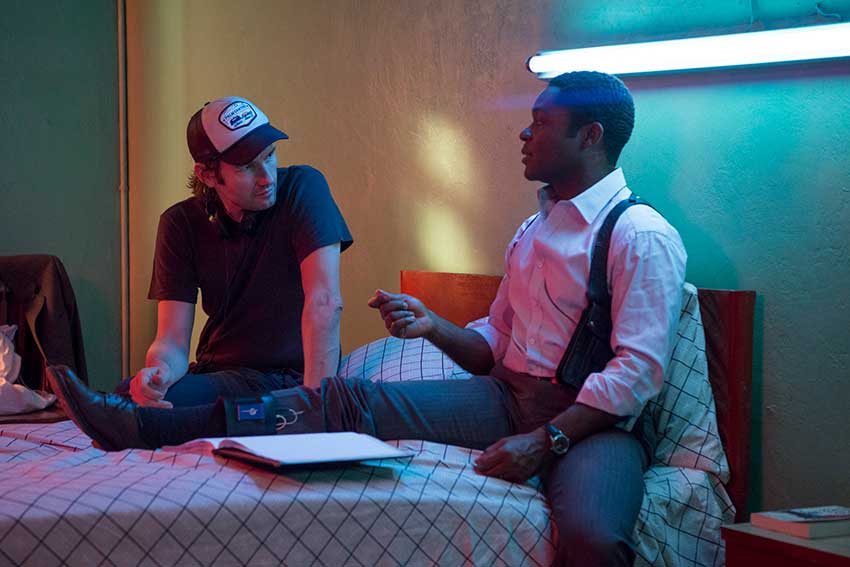 CineMovie: Do you share each other's script, or do you look to each other for advice on an upcoming project?

Nash: All the time.

Joel: Yeah, Nash has helped me dodge a couple of bullets in my life with regards to projects. Sometimes having a chat with a close sibling is like having a conversation out loud with yourself, so exactly what you want to hear, sometimes it's stuff that's hard to hear but it's necessary, that kind of stuff. Well, Nash has helped me avoid getting involved in a couple of projects which I knew deep down was not going to be a good idea. I won't name the projects.

CineMovie: Come on. And Charlize Theron is equally deliciously bad. How fun was it working with her? And I heard she was a little shy about some of the dialogue that came out of her mouth.

Nash: She's such a great person to work with, and she played that despicable character so well. Yes, she did a lot of apologizing to the crew and other cast members every time she had to say stuff but such a professional, she really went into her character and I think makes someone really enjoyable to watch and hate on screen.

CineMovie: And for you Joel?

Joel: I just kept saying to Nash when he gets in the edit room… the beauty of a character like Richard Rusk or Elaine Markinson is that they can do and say the things that your central characters can't. And in a movie like this you almost want to enjoy hating them more, and so the more controversial the better I say, and Charlize really went for it. I don't think there's a single kind of group of people that she didn't seem to offend in the movie, and the way she makes comments about certain things - I just love watching her do it because it's a very unexpected thing. In fact, across the board I think David is... David Oyelowo, we're used to watching him in dramas and Charlize has a couple of different things that we are used to watching, drama and action kind of movies. And I as an actor really like it when a director gives me a challenge of doing something that I'm not used to doing. So, this movie a lot of the actors to kind of trying on comedy, and not necessarily for the first time, but its a different tone for most of us, and so it was a fun new thing to do, particularly for David in that central role.

CineMovie: Yes, he was awesome. And the movie has some themes about kind of nice guys finish last, you can't play by the rules. What do you think about that? Do you think you have to cheat a little bit in order to to get ahead?

Nash: I think a lot of people do. I don't know it's necessarily the right thing to do. I think ultimately you do good things and it come back to you, and sometimes it's not instantaneous or it doesn't really feel like it is coming back to you, but ultimately it's the right thing to do, and what goes around does come around. Especially with what’s going on in the world, that sometimes the bad people are getting to do whatever they want, but I like to think they can’t live with themselves.

Joel: I think greed is sort of for people who don't understand the long gain. I think greed is definitely a short gain that people eventually lose. It's really a little wishful thing that I think it does reflect what we all hope, and what is somewhat true is there's a levity to being a good person that doesn't often feel immediately rewarding but it’s there and there’s a headiness to being selfish, self-righteous and self-serving that will eventually kind of weigh you down too much.

CineMovie: And I love the part at the end where there is a magazine cover and the question is posed, "Should Mexico put up a wall to keep out the bad influence?" I love that. Was that always in the film, or was that something you added?

Nash: No. It was always in the film, and we made the film before the presidential election and everything but I guess there was talk about that happening in the campaign. I thought it was important to say something along those lines of how ridiculous the idea of putting borders up is.

Nash: Oh, sure. Inherently, you can't help but have a different perspective. Australians in generally are pretty well-traveled, and it's one of the things you do when you leave school is you travel to different parts of the world. I go into any major city and there appears to be people from all walks of life inhabiting a city and I wanted to reflect that in the film.

Joel: I think Australians and Australia are very much aligned politically and culturally with America. I know there was a great fascination with us when we were growing up with just American sport and television and film and American life basically. And Australia is somewhat, in war, a bit of an ally with the United States. So I don't know if we feel as acutely what it would feel like to be an immigrant in a different culture coming to America. But I definitely think as a storyteller, and I've seen it many times in the past, it helps to sort of look at the cultural situation from something of a distance. I don't think the film is saying anything new, I just think it's picking up a certain sort of hypocrisy about greed and corporate culture and shining a light on that in a really fun way.