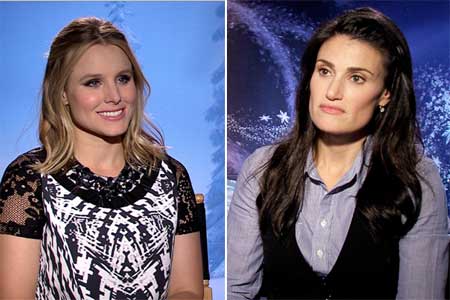 Kristen Bell and Idina Menzel join the Disney family as princesses in the new animated adventure FROZEN. As fans of Disney films, the actresses list their favorite Disney characters and villains.

FROZEN stars Kristen Bell as the voice of Anna and Broadway’s Tony® Award-winner Idina Menzel as Elsa the Snow Queen. In FROZEN, Anna begins an adventure with a mountain man, his sidekick reindeer Sven and Olaf the Snowman to find Anna's sister, voiced by Menzel, to put an end to her icy spell. CineMovie sat down with FROZEN stars Kristen Bell and Idina Menzel in New York City and reveal to CineMovie which of the many Disney classic characters are among their favorites. Kristen's favorite Disney heroine includes Ariel from The Little Mermaid and although he's not a princess, Aladdin ranks among one of her favorites since as a girl, her tomboyish tendencies leaned more to his mischievousness. Menzel chose more recent Disney heroines rather than old school for her favorites. Since becoming a mother to a boy, she's discovering modern heroines like Rapunzel in Tangled and the first African-American royalty in The Princess and the Fog while also counting Kristen Bell's take of Anna in FROZEN as a new favorite.

As far as Disney villains, Kristen names Jafar, Aladdin's nemesis in the Disney classic and Menzel along with her son Walker favorite Ursula in The Little Mermaid. She jokes that between Ursula's wide behind and his mom's voluptuous derriere, her son will appreciate a "nice, round booty."