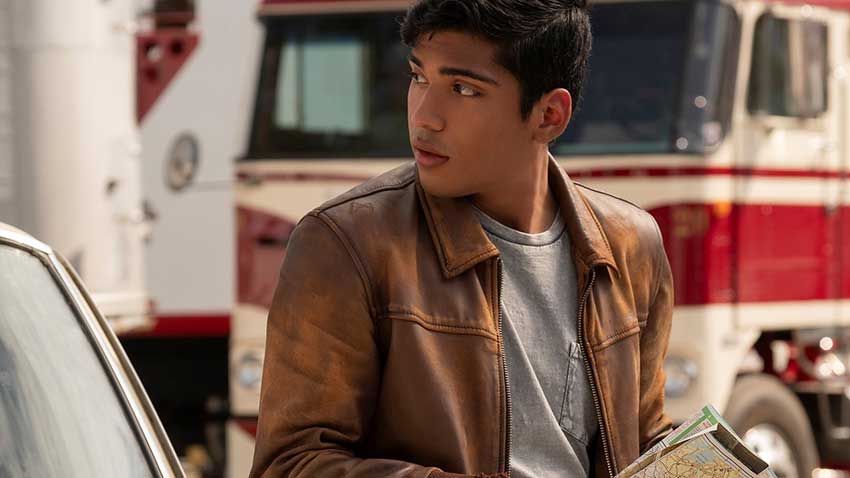 From producer Guillermo del Toro comes SCARY STORIES TO TELL IN THE DARK directed by André Ovredal ("An Autopsy of Jane Doe"), now available on Digital, Blu-ray and DVD. One of the lead stars is Michael Garza (THE HUNGER GAMES: MOCKINGJAY - PART 1) in his first starring role playing Ramón Morales. CineMovie talked to the young actor who reveals he didn't let one rejection stop him from auditioning for the same role a second time.

SCARY STORIES TO TELL IN THE DARK is set in a small town on Halloween in 1968, Stella (Zoe Coletti) and her two friends meet a mysterious drifter, Ramón (Michael Garza), and together they find a sinister notebook with stories that have deadly results.

CineMovie chatted with the young actor about starring in his first leading role and some of the behind the scenes with monster wrangler Guillermo del Toro.

CineMovie: So we're talking scary stories. How did you come up for the part?

Michael: Yeah, I just auditioned like everyone else. Couple months went by and they still hadn't cast the role and so I kind of re-submitted myself because they got a different casting director for the role because they just couldn't find who they wanted and I got cast and it was a pretty whirlwind experience.

CineMovie: That's a lesson in perseverance - not giving up, right?

Michael: Yeah, for sure. Yeah.

CineMovie: And did you know Guillermo Del Toro was involved? Sometimes they are secretive about who is involved.

Michael: Yeah, I always knew it was Guillermo from the first audition, and I was like, 'I need this. This is huge.' Being able to work with him would be incredible.

CineMovie: Are you a fan and of any of his movies in particular?

Michael: Oh yeah, absolutely. I mean, I know the typical answers like SHAPE OF WATER. SHAPE OF WATER is a masterwork, but mine would probably have to be CRIMSON PEAK, the feel of the movie and the heart of it, it affected me. So that's probably one of my favorite movies, and PAN'S LABYRINTH and HELLBOY.

CineMovie: That's my favorite too. Are you a fan of this kind of movie? It's a throwback to the classic horror movies.

Michael: For sure. Oh God, I love horror... My favorite movie is THE SHINING. I'm really excited for DOCTOR SLEEP. I love horror movies. I think there's a lot you can do with them in terms of like how our movie has a lot of heart and also just scary.

CineMovie: You have great chemistry with Zoe and the other young actors. What was the bonding like for you and the actors?

Michael: Yeah, we're all really close. I talk to Zoe probably every other day. I feel like you could feel it through the movie that we all have really great chemistry. There was no one that we didn't like or any kind of drama like that. We were all very close with each other and then we had a lot of fun filming. Yeah, it was a lot of fun.

CineMovie: Was Guillermo on set?

Michael: Yeah, that's actually where I met Guillermo, my heart was racing. He was there a lot. He really wanted to get the monsters right. So any kind of scene with a monster, he was there overseeing the whole thing.

Movie Review On The Go: 'Scary Stories To Tell in the Dark'

Michael: He was very involved in the creative process for everything. 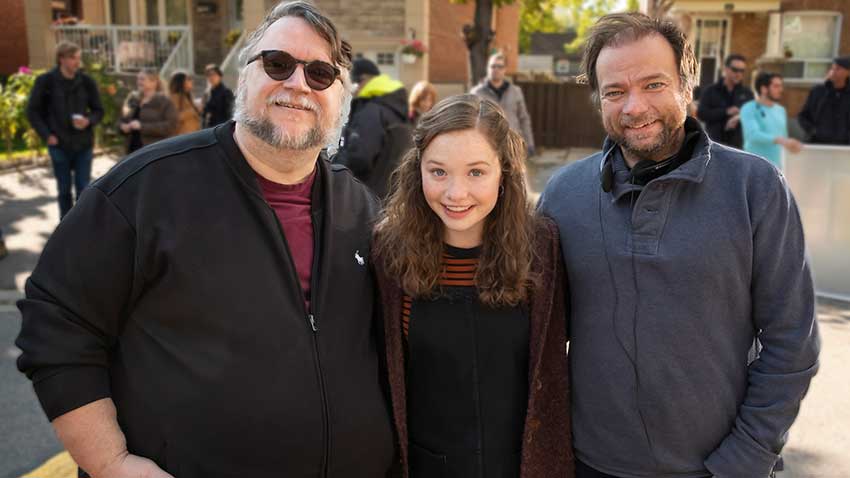 CineMovie: Were you a little nervous when he'd show up on set?

Michael: Oh my God! He's very intimidating, but to no fault of his own, purely just mine. He's such a master at what he does so seeing him in person, was like, 'Whoa.' And he's like talking to you and giving you direction and you're kind of like, 'okay, anything you say.' But he's just the sweetest guy. He's so welcoming.

CineMovie: Did he or André the director give you any words of wisdom as a young actor?

Michael André was amazing. He's a very collaborative director and that's really helpful. I It was my very first movie so they were both very helpful in guiding me and making sure that I'm not nervous or anything like that. 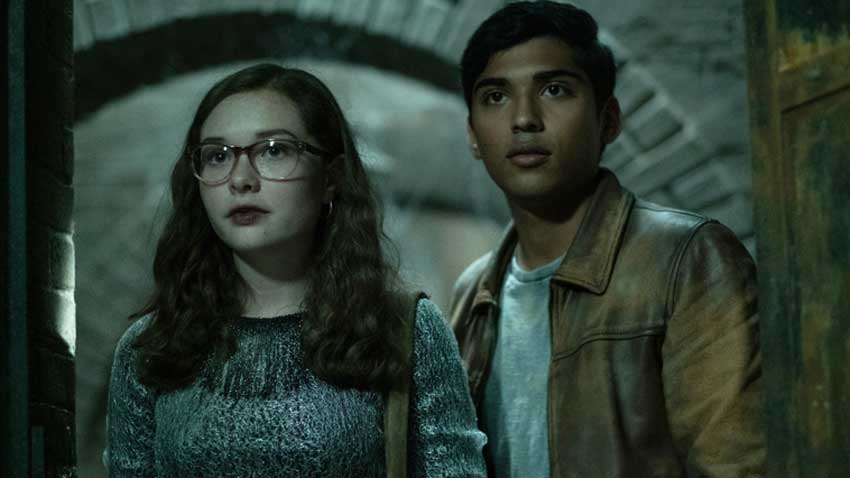 CineMovie: When it came to the monsters, what were you looking at? A tennis ball or what did they bring in to help you visualize?

Michael: They actually had the real performers in suits. So when I was working with Jangli man, I actually saw jangly man with Troy James and that was pretty crazy. I think Mike Hill and Norman Cabrera just did an amazing job with their creature design and demo. It was great as an actor to just be able to see Troy contorting in the creepy monster suit. There was no acting involved there.

CineMovie: Guillermo is big on people in suits versus CGI, so I really liked that about him.

CineMovie: For you as an actor, getting a part like this where you actually play a Latino and it's a big part of the story about misconceptions about people and how you're treated. There's some form of racism. How was it for you having that in the story?

Michael: It was really important for sure. And just to be able to be Latino in a studio movie as a lead is a once in a lifetime thing so that was really cool and exciting. And Ramon too, he's a really interesting character. The overall theme of the movie, stories hurts and stories heal and especially the stories you tell about each other. It was really interesting to tackle that and it reflects today's landscape, and to show that we've come a long way but we still have a long way to go.

CineMovie: In the movie, they use a word which I hate - 'wetback.' You're a young guy, so were you familiar with the term or the history of that term?

Michael: Yes. I've never been called that, just on set.

CineMovie: Did you have the historical perspective of that word and what it meant? It was used a lot in the 70s and 60s.

Michael: Yeah. I mean for my character, you really have to put yourself in his position. Especially that scene, I talked about it with André. It's really important because he can't lash out at Tommy because if he does, it only makes things worse. I think in that scene when Tommy calls him that, he really has to compose himself and not fight back which I think is hard to watch.

CineMovie: It's hard to watch, but in those times, people just had to take it right because they were the minority.

Michael: Right. And that's something Guillermo does in all of his movies. He has these fantastical elements and it's mixed with the reality and kind of the monsters of our reality.

CineMovie: When you got the part, what was that like for you and telling your family?

Michael: This was crazy because I actually got cast a couple of days before filming because they just couldn't find who they wanted. So I resubmitted myself in the final process and I sent in a tape and that I think a about the day later they were like, 'okay, we're flying you to Toronto to meet with Zoe.' I was like, 'okay.' Then I went back home and they were like, 'you got it, be on set and five days in Toronto.' So there wasn't really any time to process and tell everybody. It was kind of like, 'okay, I gotta start working, I gotta figure out who this guy Ramon is.' The whole process was a whirlwind. But being able to tell people is always really exciting. My family is so supportive of my acting. So without them I couldn't have done it. It was really cool to show them the movie.

CineMovie: And did you do any research of what it was like for a Mexican-Americans in that time period?

Michael: In a way, I don't think I had to do a lot of research in that because I think we can kind of experience it a little today.

CineMovie: Your character is sort of a mysterious character. We don't know what your deal is, right. Did you like reading the script and finding out a little more about this guy, and what he's all about?

Michael: Yeah. Kevin and Dan Hageman definitely wrote something that was really easy as an actor. When you have a well-written role, it's much easier of a job with what's on the page. Yeah, it was fun to read.

CineMovie: Has this movie opened up a little more the doors and what are you working on next?

Michael: This industry is definitely a tough one. I'm just kind of taking it one step at a time and seeing what's out there.