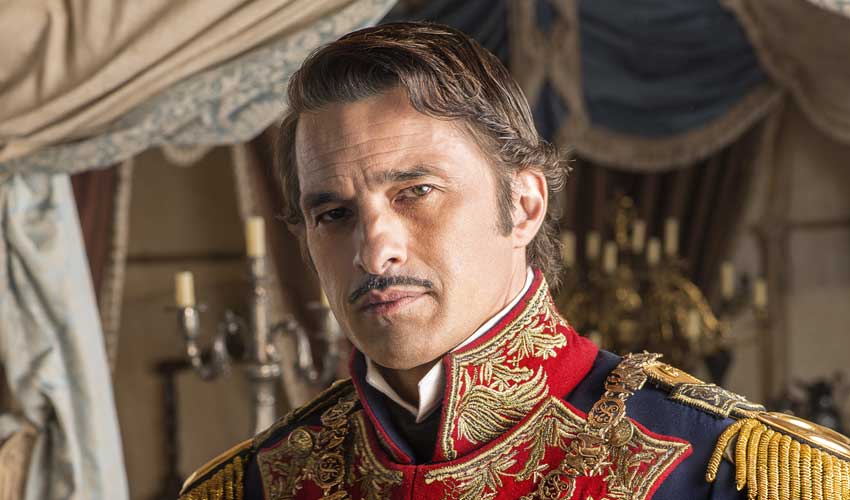 The story of the 1836 Texas Revolution is told in a 10-hour event series, TEXAS RISING on the History Channel starring Bill Paxton as Sam Houston, the leader of the Texas Rangers and Olivier Martinez as his nemesis Mexican General Santa Anna.  While TEXAS RISING portrays Santa Anna as a cruel and harsh leader, Martinez doesn’t at all see the real-life Mexican figure as a villain.

While often described as the French actor, Olivier Martinez (Unfaithful, S.W.A.T.) is actually half-Spanish (hence the Spanish surname) and still speaks the language which came in handy for his role in TEXAS RISING. He did, however, as with most films, worked with a dialect coach to get the Mexican accent right for his role as the man who lost Texas and California to the United States. 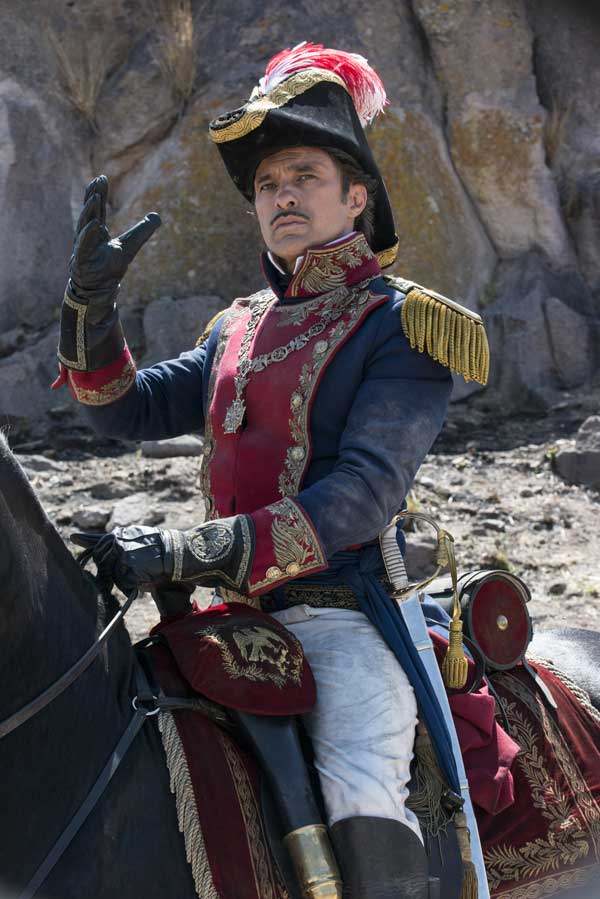 In TEXAS RISING, Martinez portrays the general who often employed brute force during his march north to bring Texas back under Mexican control after Texas declared independence from Mexican rule. Growing up in France, Martinez didn’t know the story behind the Texas Revolution although he was familiar with the Alamo and David Crockett. Martinez tells CineMovie he made sure to study the Mexican soldier and politician’s story from the Mexican point of view. Naturally, Santa Anna was the Americans mortal enemy, but Martinez didn’t see it that way.

“To the Americans, he was a bad guy. He was a fierce enemy, but he’s not the villain at all.”

What he found during his research was a man beloved by the Mexican people and often called the Napoleon of the West. He was elected Mexico’s President 11 times and ruled for 20 years despite having lost half of Mexico to the United States. Martinez credits that to his charisma.

“You can lose and still be a hero.” Napoleon lost a battle but he was supported by his own people. He was the Napoleon of the West. He was so charismatic. He didn’t care about politics. He was a soldier. He was a womanizer.”

Playing the Mexican general was a thrill for the 49-year-old-actor who loved playing dress up and riding horses while shooting in Durango, Mexico for six months. Watch clip below.

“Its a wonderful landscape to shoot a western with it’s Spanish missions and architecture and pueblos. It looked like Texas at that time.”

He adds that he was surrounded by 700 extras in costume while he drank his cafe latte sitting on his horse. It was a surreal experience that he will not forget anytime soon.

“This is a movie guys. We’re shooting a movie. This is what I’m talking about. “That’s why I like to be an actor. To play in these epic movies. This is what we are able to achieve.”

Not only did he love that the setting was all real, but so were the stunts. Martinez reveals he did his own stunts like the scene where he falls off his horse. When asked if he was hurt in the process, he tells CineMovie that he was “used to it.” He has been riding horse since he was a child.

Martinez says he’s able to leave his character on the set once the day is over. He rarely brings characters home.

“Its more like the art of illusion. We play like children and then we go home and forget about it. At least in my case.”

The actors were “amazing” to work with especially the Mexican actors and Bill Paxton who he calls a “very creative actor.” Bill Paxton also provided a good laugh one day on set. Martinez says Paxton showed up painted blue with a tomahawk and dressed as a Apache or Comanche for a fight scene at a Mexican camp. “What’s this smurf doing here,” he joked with the crew that day. That day he describes as “pretty intense.”

TEXAS RISING begins airing Monday, May 25 on the History Channel at 9pm and every Monday thereafter.