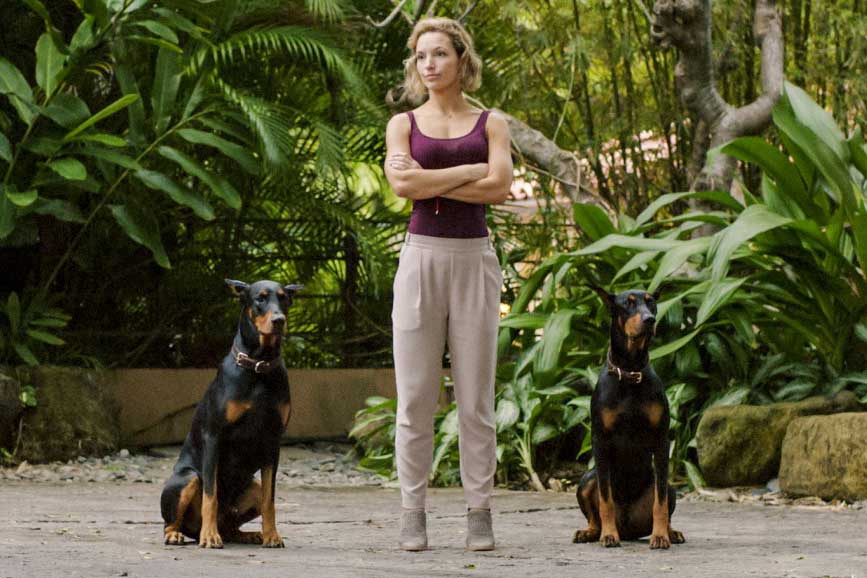 CBS' reboot of "Magnum PI" premiered last Monday with Jay Hernandez in the lead role as Magnum. Magnum may be suave but the updated of version of Higgins, played by British actress Perdita Weeks, gives the men a run for their money as the bad ass of the group. CineMovie chatted with the scene stealer about her cool action stunts and what it's like working with those menacing-looking Dobermans.

Perdita Weeks is best known for her roles in "Penny Dreadful" and as Mary Boleyn in "The Tudors." In "Magnum PI." Weeks plays Higgins originally played by actor John Hillerman on the 80s show. Higgins was gender swapped which was very much needed since the original lacked any female leads. Like the predecessor, Higgins is a no-nonsense, stuffy character, but one that can take down an assailant.

The new CBS show centers on Thomas Magnum, a decorated former Navy SEAL who repurposes his military skills to become a private investigator. He's living in a guest cottage on a Hawaiian estate. The "majordomo" of the property is Juliet Higgins, a commanding disavowed MI:6 agent whose second job is to keep Magnum in line, with the help of her two Dobermans.

CineMovie caught up with Perdita Weeks in August at the Television Critics Association CBS panel to get the deets on the behind the scenes of CBS' new Monday show, "Magnum PI."

CineMovie: I really like your character. You’re kick ass. You break out the moves?

CineMovie: Did you have any stunt experience beforehand?

Perdita: I've done a lot of really physical roles. I really enjoy it. It's really fun. I mean I’m not properly trained in martial arts, just with friends and family. I have a very supportive family.

CineMovie: You look like you’ve been doing this for a while.

Perdita: Yes. I can handle myself and stuff. We have a great stunt team, and they just show you. You just rehearse enough times and it goes… it's just great fun. It's really just so much fun to play.

CineMovie: Yes, I loved your scenes because the camera stays on you for most of the scene.

Perdita: No, no it was me doing it.

CineMovie: There are usually a lot of cutaways to the stunt woman, but not in the pilot.

Perdita: No, I did everything except there's one piece where there's a backflip through pane glass which I wasn't allowed to do. I wanted to.

Perdita: Yes, it's tricky. Yes, we have a great team and she makes that going backward through the thing…. but yes they made me look great. 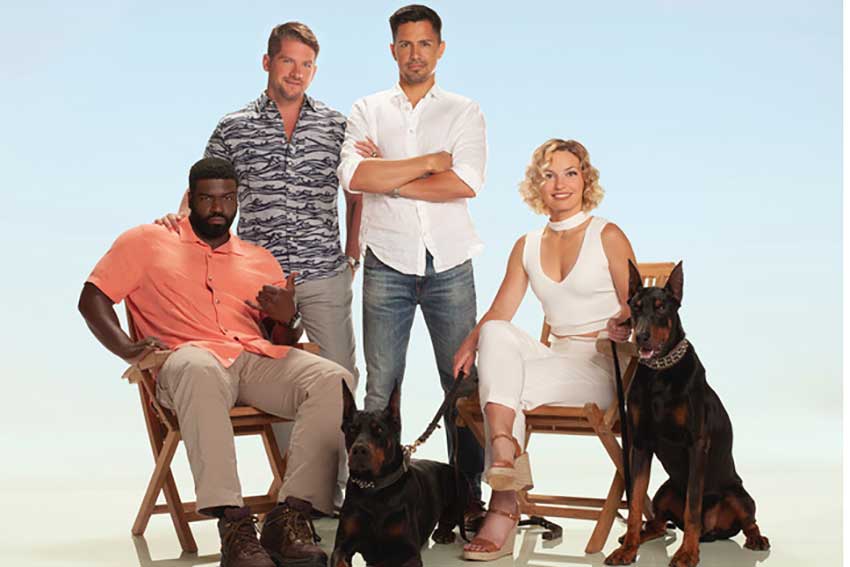 CineMovie: Those doberman pinchers? Are they lovable?

Perdita: They are. They are so beautiful. They’re gorgeous. I mean they're cute. They are like small ponies.

CineMovie: Do you stand them up?

Perdita: Yes. If you stand them up their heads come to about here (pointing to her neckline). They're fantastic, and we have great handlers and stuff. It definitely adds another thing to think about when you're going through a scene and you got to slightly keep the dogs in check but it's great and it's a strong woman with these great beasts totally at her behest, which is kind of cool. And with Magnum, the dogs they really don't like him and they're an extension of her to some degree. It’s a visual expression of her power which I really like.

CineMovie: I wasn’t a fan of the original - it was all men.

Perdita: Yes, there were no women in there and there is no one you can associate yourself with which is what everyone-- which what we are trying to do with this one is that there is someone for everyone where it’s just a bit more representative.

CineMovie: In the pilot, we learn your character of Higgins is a former MI6.

Perdita: Yes. She's like MI6, and she knows her way around a computer and a golf club and a gym and a car… there's no shying away from her being able to drive just as well if not better than all the guys. Yes, I mean--

CineMovie: And not destroying them…

Perdita: She's very careful with everything. This is like the most expensive piece of machine. She's constantly giving Magnum a hard time for not keeping it clean and she's a kind of an every woman. Someone said her to be, ‘she is snooty,’ she's actually not snooty she's just responsible and when we're going to find out and then see why she's there? What's she doing in Hawaii? It's about as far from home is she can get and I know that because I live in the UK and it's very far.

Possibly she's got a little bit of a murky history that we're aware of and at the same time, she's kind of on her own. She is far-flung which is why the sense of camaraderie she's getting a peek of with these guys is appealing to her and she misses that team. That’s her motivations to getting involved.

CineMovie: She’s got to break into the boy’s club?

Perdita: Yes. Because she's used to being in a male-dominated world-- being in the services-- and that's in my head that's her reasoning for wanting to get involved with these guys. She misses the sense of adventure that she had.

CineMovie: The dogs-- did you have to get to know them beforehand?

Perdita: Yes. Somewhat. It's going to get easier and easier. I go up to them, and they will snuggle on my leg and stuff which is really sweet but they're very drooly. I get on really well with the trainers and as much time as I can spend with them is better. They are just going to become such pros by the time we're finished.

CineMovie: Do you have to watch sudden moves?

Perdita: No, not at all. They're super chill. They don't like hanging around for long periods of time. They get bored. They're animals. They are incredibly well-behaved and you're not supposed to say ‘action’ around them because they know the word ‘action.’ You have something to say, “Proceed." When they say ‘proceed,’ all of us actors are going, ‘duh, what?” The dogs are doing exactly what they should be.

Perdita: They didn't know each other before the pilot. When they first saw each other were a bit… because they were both boys and obviously they were a bit like, who is Alpha? Much like it is with the boys with the actual men. Who is the Alpha dog? (laughs)

CineMovie: We know how that is!

Perdita: They've worked it out. They’ve figured it all out. They're okay with each other, and we also have a girl dog Roxy, who is one of their girlfriend. They're like boyfriend-girlfriend and when we need to do a scene where they're together and running together, we just bring in the girl and get her to do it because she's not racing. It's really hilarious.

Perdita: I know it's really… it's an interesting dynamics.

CineMovie: Not in a Ferrari?

Perdita: No, it's an SUV. Yes, how many of us can fit in a Ferrari? Well we'll find out. Keep watching. Yes it was a brutal fight. It's great. Its really good fun.

CineMovie: The producers said the action such as explosions were going to be minimal so it sounds like it will all be physical.

Perdita: Yes, I mean because we all enjoy it. Steven, Zack, me and Jay we all love that stuff. It's really good fun. It's just different. It's an interesting use of physicality for us. It's not the day-to-day for us. It feels a bit badass, which of course everyone likes to feel.

CineMovie: And you're doing it on the island of Hawaii.

Perdita: Yes, it could be worse. I’ve shot in a lot less glamorous places in suburban England. It’s kind of amazing. We’re shooting in a different location every day and we’re only in sounds stages twice a week. So even a drive to work is just spectacular. It's the most beautiful country…

CineMovie: I don’t know how you guys concentrate?

Perdita: It's extraordinary, but I'm really glad I have sat (satellite) now which just talks to me in an English accent bizarrely enough in my little mini that I'm driving around Hawaii because I'm staring at the mountains,‘and then take a right.’ I just stop and take photos everywhere. It's amazing.

CineMovie: Did they clue you into how many stunts you’d be doing? Is it more than you imagined?

Perdita: It's more than I imagined. I'm pleased. I'm very pleased. I'm pleasantly surprised because when you read a stunt on a script its one sentence and then they fight. You don't have any idea what it's going to look like until some people bring you in, and then they say, and they give you the idea and it's like awesome and if you tell them that you enjoy doing it they'll add more because for them it’s their craft. Choreographing these amazing fights is really-- it’s what they love to do. If it’s more complicated the better They are literally in it-- to make us look great which is so fantastic. They'll put as much rehearsal and training into it as they need to. I think it'll be more and more and more I reckon.

CineMovie: We have a lot of haters in this world so gender swapping the Higgins character will have someone upset. Do you follow social media?

Perdita: No, I haven't actually. I haven't seen any but I'm not looking for it. I just figured it’s really beloved character and it’s different. I understand if people feel a certain way, but I would say it be great if they watched it. I think it’s so different. Visually so different but it just it adds a little flavor to that. It's just a whole another dynamic to the show when we're playing some really fun scenes, and we're just like an old married couple. Then sometimes we’re more like brother and sister, and then we're like a divorced couple. It's fun.

CineMovie: I was asking because of Doctor Who being female now, a lot of people were excited but …

Perdita: So exciting! So awesome!

CineMovie: So you’ve joined the club?

Perdita: Yes, absolutely. I mean good company. What is the show? What's it called? Sherlock Holmes and Watson, 'Elementary.' Yes, Lucy Liu. The best reconfiguring of a very famous male character. How great is it? It so works. It's not like it's the first time it's been done, but it definitely works. I think it's perfect for Magnum.