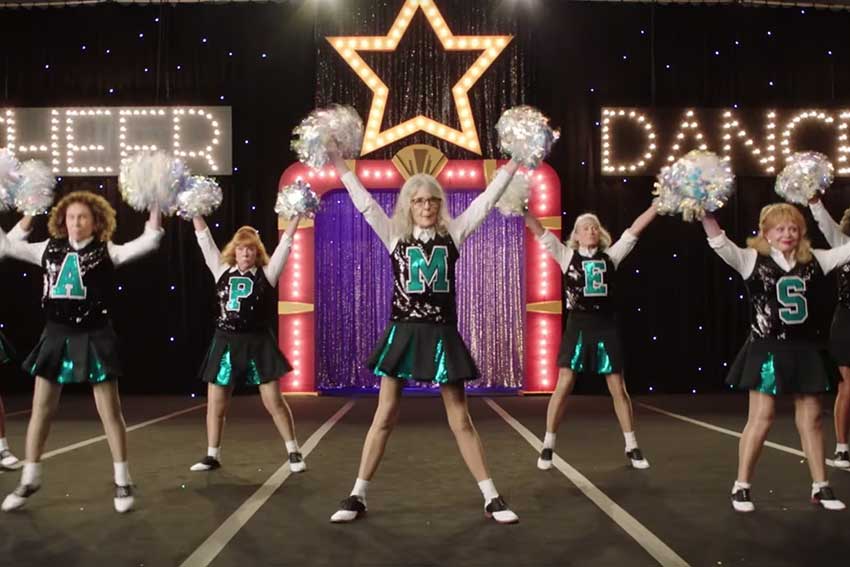 Screen icons Diane Keaton, Pam Grier, Jacki Weaver and Rhea Perlman form a cheerleading squad for their senior living facility in POMS. The story may be far-fetched, but British filmmaker Zara Hayes came across photographs of a real-life senior citizen cheerleading team. She was inspired to make a movie about these women but she resisted the urge to make it a BRING IT ON version. Luckily for the actors, backflips and high jumps were not part of their routine but cheering in unison still had its challenges.

In POMS, Diane Keaton's Martha picks up the pom-poms for one last hurrah after her gregarious and young-at-heart neighbor (Weaver) pushes her out of her loner meltdown. She recruits other repressed women to join the squad. A friendship forms bonding them forever.

POMS marks Zara Hayes first narrative feature. Known for her documentaries for Netflix, BBC, A&E, National Geographic and others, she initially wanted to make a documentary about these real-life women. She tells CineMovie while researching the subject, she discovered dozens of senior cheerleading squads across the United States. She decided a feature film would do better justice to these women's stories. She also had a change of heart about cheerleading in general.

"It's kind of sexist in a way. The idea that women have to cheer for a man. It kind of goes against all of my feminist principals in a way. But on the other hand, seeing these women and the look in their eyes. They were so joyful and empowered, and I couldn't get these images out of my mind."

Coming from a documentary background, she wanted to ground the dancing and avoid using stunt doubles for the action. In early conversations about the movie, others wanted POMS to emulate cheerleading routines with backflips and pyramids but she fought against it. 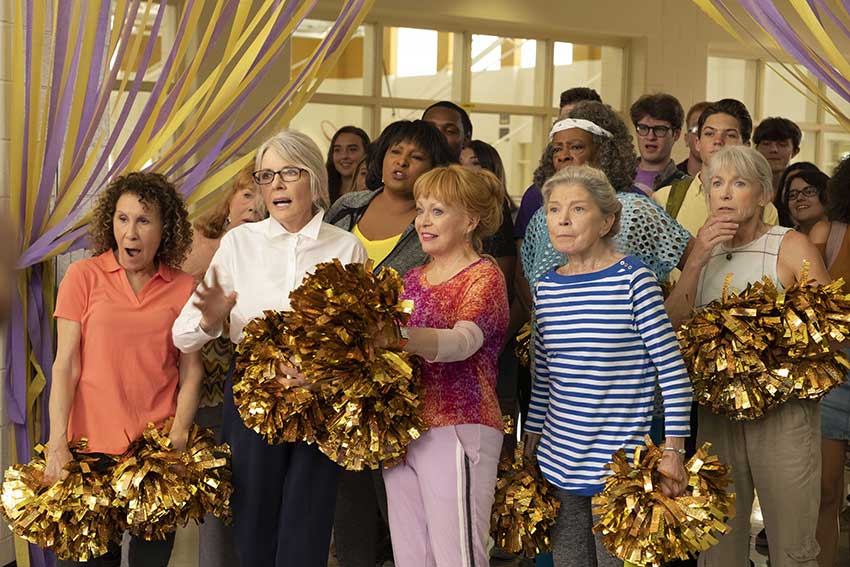 For that reason, she didn't want to hire actresses based on their dancing abilities. However, they did have to cast an actress who could do the splits but the director was doubtful they could find someone with that skill. Luckily for them, former "American Ninja Warrior" contestant
Ginny MacColl, who plays Evelyn, was up for the challenge.

Hayes recalls MacColl performed a split during audition and the deal was sealed.

The largely female cast did not have a dancing background, however, the POMS director resisted stunt double for the actresses, except for one move which called for actress Phyllis Somerville to take a fall after being tripped during a routine. Except the theatrically-trained actresses insisted on acting out the fall herself.

"Every take she would throw herself down. The AD (assistant director) was worried she was really going to break something," according to the British filmmaker.

Learning a new routine while being in sync is no easy feat for anyone without a dance background, but the senior-aged actors were determined to get it right. Choreographer Marguerite Derricks trained the ladies at a week long cheerleading bootcamp in Los Angeles.

"They were very patient with us because they realized they had to be." 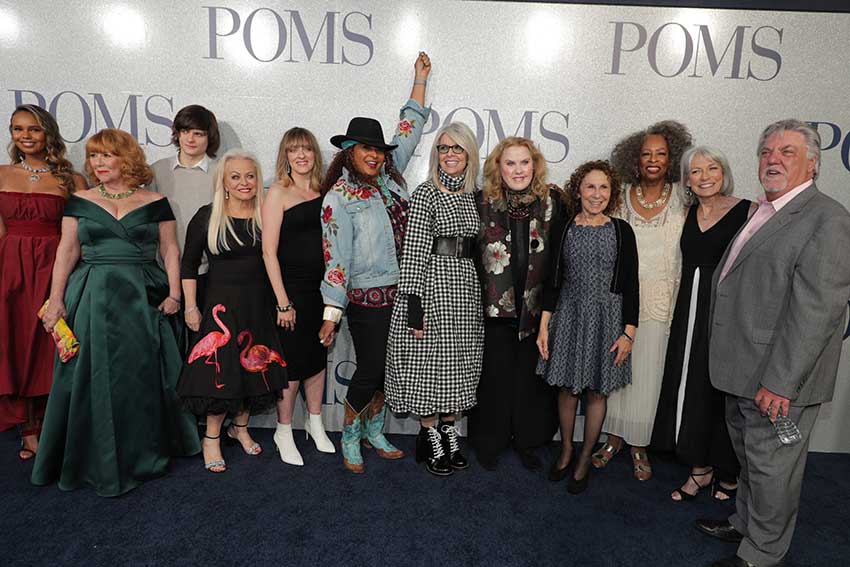 Sutton also revealed Diane Keaton greeted the women on the first day of bootcamp when they all arrived together in a car. "Can you believe we're doing this?" Keaton said to the women, according to MacColl, and then hugged everyone. They knew right away they were in good company.

The pep talk by Keaton didn't prepare them for what was to come, a grueling training schedule. Jacki Weaver, sitting alongside Keaton at the Los Angeles press day, tells CineMovie it was physically challenging.

"In my younger days, I did musicals and I did do a bit of dancing on stage." [Keaton rolls her eyes in a playful way]. "I'm not a trained dancer but that was a long time ago but now I'm a bit creaky with age and I did find it tough-going. It was pretty exhausting."

Rhea Perlman is very active in her personal life but nothing prepared her for this POMS role.

"I love that kind of challenge. I never did any sports. I wasn't a sports person but I did like to dance. I do yoga. I hike. I do a lot of stuff. I have good genes so I can still do that which is great. It much more difficult than I thought. We were not allowed to have marks. It was a lot but you felt good everyday."

Once production was underway in Atlanta, the actresses resumed their training and repetition is how they nailed down the routine. The choreographer named the dance moves to make it easier for them. Sutton, Patricia French and MacColl recall some of the names as "fishing," the Elvis, "reel it in" and the "butt wind" just to name a few.

For Keaton, the dance routine wasn't the hardest part. Her emotional journey as Martha was the challenge and she credits her costar Jacki Weaver for getting her through the scenes.

"She changes my life," says the 73-year-young actress. "Friendship saves me to go on to something that's a greater loss.. your own life. She got me through her emotional moment."

Veteran actress Celia Weston didn't have to cheer alongside the all-female squad to play the mean girl of the retirement community, and she's thankful for that. "No one wants to see me in spandex," she jokes. However, when she heard the cast line-up and a woman was behind the camera, she thought to herself, "Who needs a script?"

"Knowing we'd be with all these great women and woman director. All women stars. It's kismet."

Men have had plenty of inspiring and endearing films about reaching senior citizen age like THE FULL MONTY, THE BUCKET LIST (Jack Nicholson, Morgan Freeman) and LAST VEGAS (Morgan Freeman, Robert DeNiro, Michael Douglas, Kevin Kline) so it's time for the ladies to shake their pom-poms.