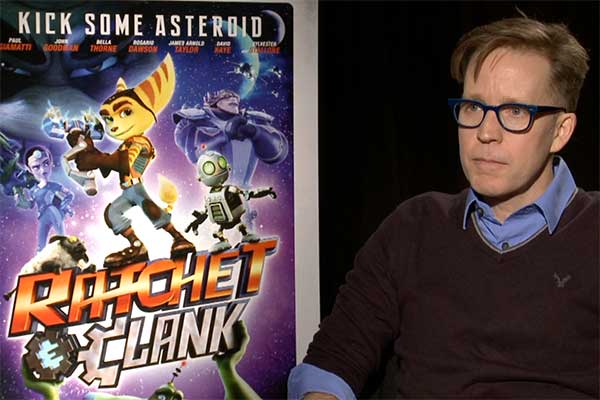 When video games are adapted for the big screen, Hollywood often replaces the voice actors with a celebrity actor, but that’s not the case for voice actor James Arnold Taylor who voices Ratchet in Playstation’s popular game and the new movie, RATCHET AND CLANK.

A working voice actor since 1984, James Arnold Taylor’s body of work is very impressive with over hundreds of roles in animated television series and video game projects. He’s the voice Obi-Wan Kenobi in Star Wars: The Clone Wars and Star Wars Rebels, and superhero roles in the LEGO DC animated television series and as Leonardo in the Teenage Mutant Ninja Turtles video games and 2007 animated movie.

In 2003, Taylor took over the voice of Ratchet from Mikey Kelley and has since voiced Playstation’s galactic hero. He tells CineMovie at a recent Los Angeles press conference that he was thrilled a celebrity didn’t replace him in the movie version. Taylor says in the interview below that Ratchet’s voice is basically his natural voice. He demonstrates his many voices to prove that theory.

Taylor also praises Bella Thorne‘s voice over work as Cora in the film. CineMovie asked her how she channeled the tough-as-nails attitude as the voice of one of the Galactic Rangers in RATCHET AND CLANK. Listen to her response in the interview below.