'Scouts Guide to the Zombie Apocalypse' Stars Want To Fight Trump, Gremlins and Bloods in Sequels 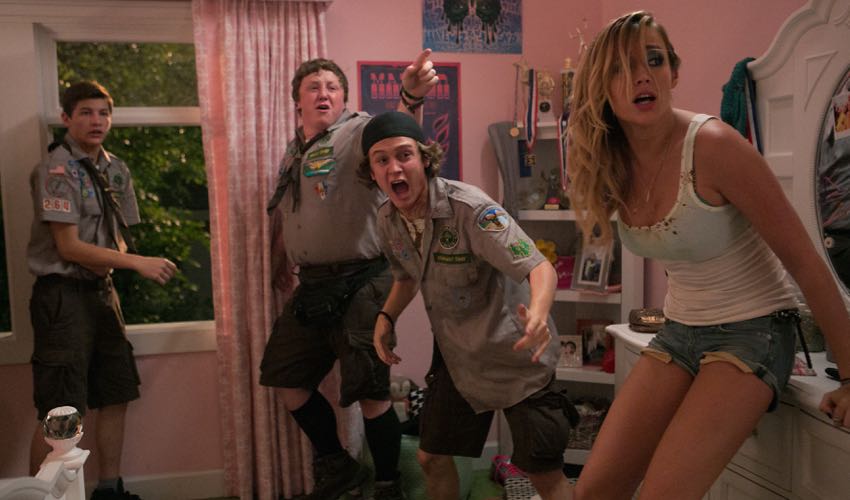 Logan Miller, Joey Morgan and Sarah Dumont battle zombies in the comedy horror, SCOUTS GUIDE TO THE ZOMBIE APOCALYPSE. If the film is a hit at the box office, the actors have an idea of who the scouts should fight in follow-ups to the movie. Logan Miller is also telling CineMovie about the awkward scene in which Cloris Leachman is actually chomping down on his bare buttocks.

Three scouts discover the true meaning of friendship as their town is quickly overtaken by zombies. The teen boys (Miller, Morgan) team up with Denise (Dumont), a tough chick and stripper club waitress, to save their friends and family from the zombie apocalypse. Watch Trailer

Morgan, Miller, and their co-star Tye Sheridan quickly formed a bond around their own scout activities before shooting when they camped out in the woods pitching tents, telling stories, and basically “hanging out,” according to Logan who plays the girl crazy teen “Carter.”

“Right off the bat, the chemistry really worked, and it felt right. I think everyone was in agreement on that.” 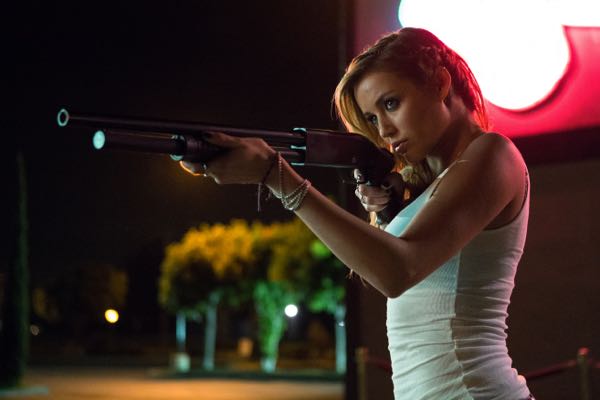 As Denise, Sarah Dumont didn’t need much preparation in handling the shotgun that blows off some zombie heads. She tells CineMovie she grew up around guns because of her father, so on set she did an “overview” versus training with the weapon.  It’s no wonder the actress looked right at home holding the piece.

SCOUTS GUIIDE TO THE ZOMBIE APOCALYPSE is just one of many projects based on the undead, but the Paramount film may be the only one from the perspective of pubescent boys, which leads to much of the humor in the film. In one scene, Logan Miller's character would love for a woman to nibble on his behind, but in the movie that woman turned out be his neighbor played by the always funny and quirky Cloris Leachman. The scene called for the 89-year-old actress to chomp down on Carter's bare butt cheek after she has turned but without her dentures, she can't quite get a good bite.(Watch clip below). The experience left quite a mark (pun intended) on the 23-year-old which he recounted to us.

“She’s a fiery devil and she’s obviously satisfied sexually. I know because she ate my butt. No woman off that age has done that before."

Before he can go on, his co-star Dumont corrects him. "A woman of that caliber." He continues his story.

"We really bonded with her mouth going right on my rear, and I hope we can do it again in the future."

What Cloris Leachman game for that scenario? It was a resounding yes, says Miller.

"Oh, yeah! She was having a ball with that. I didn’t think she’s seen as ass of that age for years." 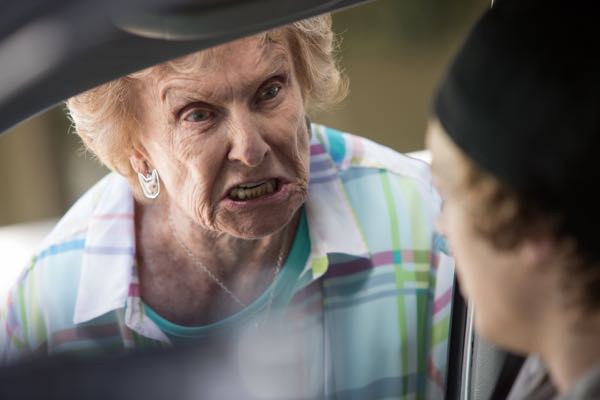 The actors didn't need any introduction to killing zombies. Miller, Morgan and Dumont are fans of previous films in the genre. Joey Morgan and Logan Miller cite George Romero classics as some of their favorites along with most recent remakes of the classics and of course, Sean of the Dead. Sarah also agrees with their choices and adds "Fear of the Walking Dead" into her list.

Now that they've battled zombies on screen, are the actors ready in real-life and what skills do they possess that would help them in case the undead become a reality? Luckily for Miller, he tells CineMovie he's an expert at Judo.

"I'm really good at chopping off heads with my karate kick. So I'll take that in a zombie apocalypse and knock them off one by one."

As for Morgan he suggest strenth in numbers. " I would band together with people I know. That's what I would do." Dumont agrees that a group are more likely to survive than going at it alone. An important lesson we've learned on "The Walking Dead" of course. 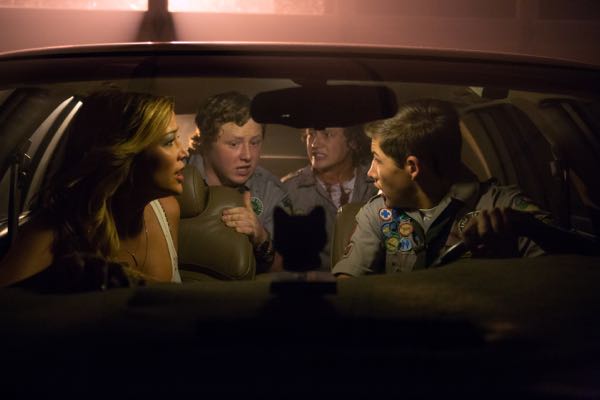 Most Hollywood movies are conceived as potential franchises so would they be up for returning in a sequel? All three respond with enthusiasist "yes!" and offered up new adversaries. Logan Miller starts first.

"You know we got to kill something else. Chris Landon [writer] pitched us one. So we think it could be a real cool thing - Scouts vs Gremlins. So we got to get the rights to that and let's make it happen."

Joey Morgan adds to the ideas.

"Scouts versus Donald Trump. That'll be such a quick movie."

The SCOUTS GUIDE TO THE ZOMBIE APOCALYPSE stars are on to something, particularly Scouts vs Gremlins, but it will all depend on the box office returns when the horror comedy opens October 29.