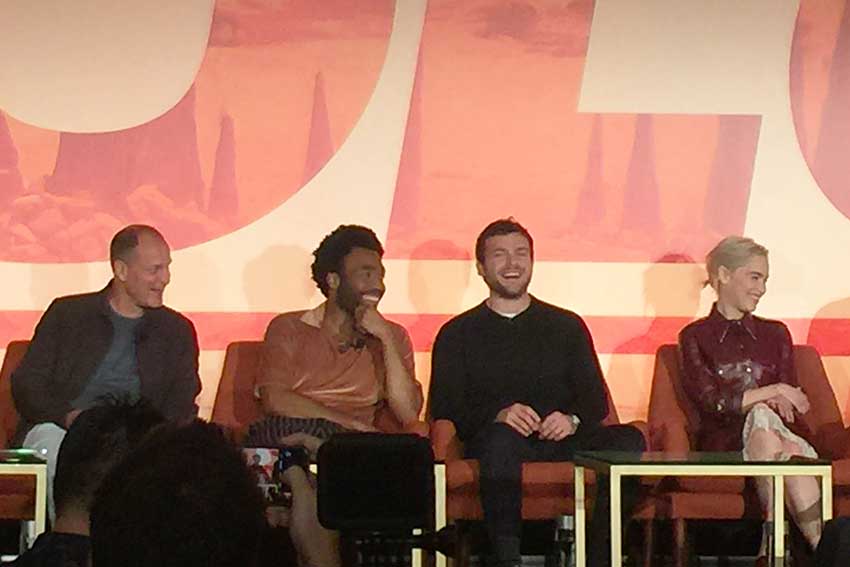 SOLO: A STAR WARS STORY finally hits movie theaters May 25 starring Donald Glover, Emilia Clarke, Alden Ehrenreich, Woody Harrelson, Thandie Newton and Paul Bettany under the direction of Ron Howard. The stars and filmmakers gave some insight into the making of the standalone STAR WARS movie at the Los Angeles press conference. Watch as they reveal how they came to their roles and why Donald Glover asked to be in the film.

Solo: A Star Wars Story Movie Review: You May Need A Second Viewing

During the 40 minute interview, the actors, screenwriters and director revealed some behind the scenes during the filming and writing of SOLO: A STAR WARS STORY. Donald Glover admits he practically begged to get the role of Lando Calrissian. He's been a fan of Billy Dee Williams' character and if there was ever a time a young Lando would come to the big screen, he would have to play him.

'Solo: A Star Wars Story' Behind The Scenes: The Making Of A Scoundrel

Thandie Newton also told a cute story about her young child meeting R2-D2 on the set. The actors praised both the writers and Howard for bringing a clear vision to the Han Solo stand alone movie which only indicates that under the first co-directors, the actors were in complete chaos.