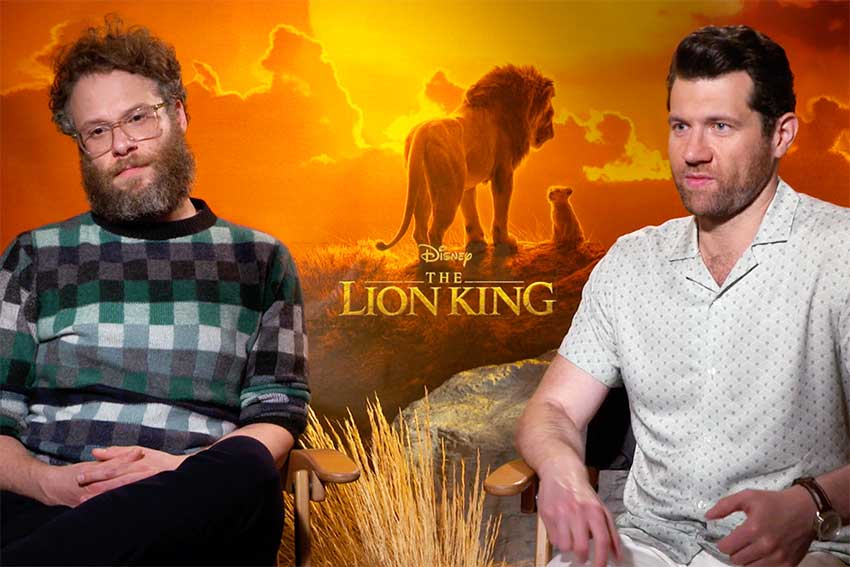 Seth Rogen and Billy Eichner are the scene stealers in Disney's THE LION KING remake as Pumbaa and Timon. The actors explain the magic happened during their improvisation session while recording together in the sound booth under Jon Favreau's direction. Watch below.

Jon Favreau (IRON MAN, JUNGLE BOOK) directs Disney's live-action remake of THE LION KING. While most of the movie is very similar to the original, scene by scene, some of the dialogue was updated to reflect modern times and for laughs. Rogen who voices Pumbaa and Eichner as Timon provided much of the laughs in the remake.

During the Los Angeles press conference with the voice cast (Donald Glover, Alfre Woodard, Chiwetel Ejiofor, Keegan Michael-Key), director and composer Hans Zimmer, Rogen and Eichner couldn't believe most of their improvisation in the recording booth together made it into the movie. They say Favreau gavae them the freedom to riff against each other, and it obviously paid off.

Director Jon Favreau’s all-new THE LION KING journeys to the African savanna where a future king is born. Simba idolizes his father, King Mufasa, and takes to heart his own royal destiny. But not everyone in the kingdom celebrates the new cub’s arrival. Scar, Mufasa’s brother—and former heir to the throne—has plans of his own. The battle for Pride Rock is ravaged with betrayal, tragedy and drama, ultimately resulting in Simba’s exile. With help from a curious pair of newfound friends, Simba will have to figure out how to grow up and take back what is rightfully his. The all-star cast includes Donald Glover as Simba, Beyoncé Knowles-Carter as Nala, James Earl Jones as Mufasa, Chiwetel Ejiofor as Scar, Seth Rogen as Pumbaa and Billy Eichner as Timon. Utilizing pioneering filmmaking techniques to bring treasured characters to life in a whole new way, Disney’s THE LION KING roars into theaters on July 19, 2019.