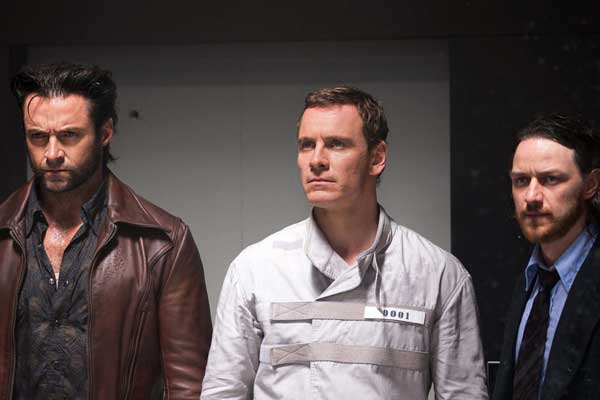 Hugh Jackman is calling the newer generation of X-Men "younger and more inexperienced actors" and Patrick Stewart is coming to his fellow actors defense as the cast riffs about reuniting with their old cast mates and the newbies on X-MEN: DAYS OF FUTURE PAST.

What better way to begin blockbuster season than with one of the most anticipated films of the year, X-Men: Days of Future Past?

Directed by Bryan Singer, the film centers on two time periods, in which the characters from the famed comic book series must team up with their younger selves to fight for the survival of their species.

Q: If I were to describe this movie in one word, it would have to be "intense." Are there any particular moments that stand out to you as being particularly intense to film?

Hugh Jackman: It's difficult for me to answer because I don't really talk to anyone when we're on set. I don't like people looking at me. (Laughs) It sort of felt to me like two different films because the beginning is the future, which was like an incredible reunion for all of us. Then, on came the younger--more inexperienced actors. (Laughs)

Patrick Stewart: Can we stop calling them that.

Jackman: Should we just call them inexperienced? I'm probably uniquely qualified to say, having worked with everyone, that being on the set was a complete joy. This film has always had a great bond from the beginning and I felt it working with you guys. Everyone's very passionate about it and takes it very seriously but has a lot of fun. I was never sure it would be possible to fill the shoes of Ian and Patrick but when I saw First Class, I realized these guys did it with such a plum and confidence. Not only did they feel that younger versions of those characters. They made it their own. 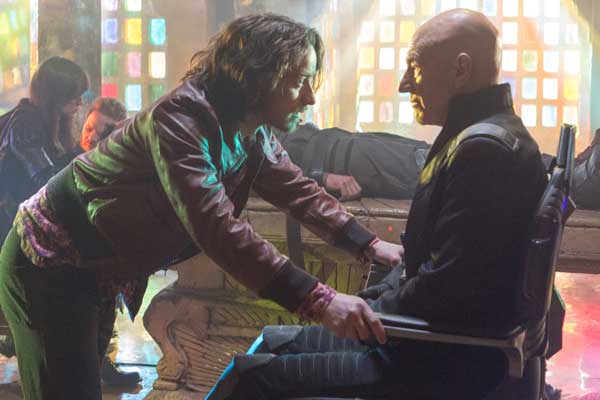 Q: Ellen, so much of this movie hinges on what you're doing to Hugh's character, what were those moments like to do?

Ellen Page: It required a lot of focus. I'm getting to be in a confined space with extraordinary actors. So, one minute I'm watching Patrick deliver a monologue and it's just blowing [my] mind and [I'm] just inspired by it. The next minute, you're spending your day with the loveliest human beings, who are smart and funny and generous. It just makes everyday a joy.

Q: Patrick and James, your scene together is so powerful particularly because of your close physical proximity. What was that like? How did you want to coordinate with the actors playing the older versions of your characters?

Stewart: If it had been in a set where we could have gone for cocktails, opened the window, had a cigarette, [it would have been] a very different kind of scene. I'm not quite sure how it came about, that we were nose to nose like that, but I can't now think of any other possible way of making the scene work, because you are looking into the eyes of yourself.

McAvoy: I've been a fan of Patrick for [many] years. I watched him for seven years in Star Trek and way back to Dune. So getting to come and do my version of a character that he's been in charge of for fourteen years, and at his face, was quite nerve-wracking.

Fassbender: I actually didn't get to talk to Ian until Comic Con. We sort of kept missing each other. For this one, I had this thing on YouTube that was basically Ian McKellen giving an RC workshop about MacBeth. I sort of way playing that over and over again to get the rhythms and tones of his voice and then we finally did get to meet in Comic Con, which was great. Unfortunately, I didn't get to have a scene with him. We tossed a coin and James and Patrick won. (Laughs) 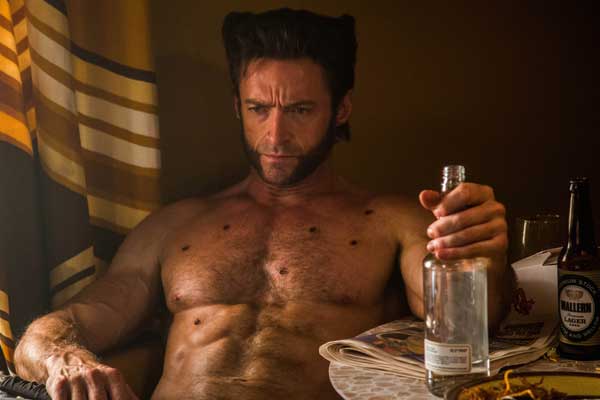 Jackman: I think one of the many things that Simon did so brilliantly with this script was invert what happened in "X-Men" where Professor X was a mentor/guide for Wolverine and that became the opposite in this movie. In fact, there's so many great surprises in this for "X-Men" fans not only of the comics but the film series and yet you still make the film feel not just like a celebration but a fresh beginning.

For Wolverine going back to the 70s'…it's perfect. I don't think Wolverine ever wanted to leave the 70s'. The hair, the mutton chops, the cloths.  I think the moment that Tears For Fears, Flock of Seagulls, Wham!, Duran Duran came along, Wolverine was like, 'I'm out!'

Q: This movie is heavy. What were the difficulties of making this film… where many of these characters actually die and get pulled apart?

McAvoy: There's a few things. When you're seven movies in you've got to stretch the characters, to give the audience something new. Half the point of going back in "X-Men: First Class" was so that the audience can be there for the key turning points in [these characters'] lives when somebody goes through the crucible and is galvanized, somebody is formed and becomes who they will be. So, you've got to hang around for the worst moments because what doesn't kill you makes you stronger. What's interesting about this movie is that most people do get killed, they don't get made stronger.

Stewart: This movie from the very start has found [Professor X] in a situation like never before. Whenever we've seen the good professor, he's always had options and those options have included negotiation, persuasion, diplomacy…some that will not be violent. Right from the beginning of this movie, there is no other option because our enemy is not available to rational conversation or to being reasoned with. The Professor has had to make the decision that we have to destroy something and it toughened up Xavier quite a bit.

McAvoy: One of the beautiful things about a company like this is that they're multi-award winning, biggest people on the planet and yet the egos were never present. Just people that worked hard for one another. Sometimes it is nice, when you're doing the heavy heavy heavy stuff, it is nice to be pulled out of it by other cast members who know when you need to be pulled out of it. We were all there for each other.

Q: Will this be the last we see of Xavier and Magneto?

McAvoy: We hope not. Let's see how the box office works.

Stewart: Where we leave James in this story, we're waiting to see the transformation of his character. That's a movie I'd pay good money to see. 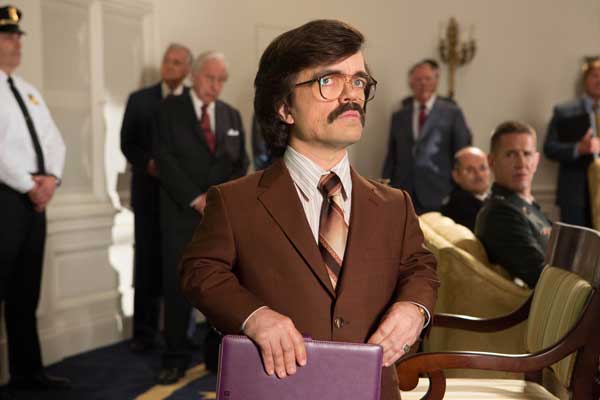 Q: Peter, you've become sort of a go-to villain with your other role [in "Games of Thrones"] and here.

Peter Dinklage: This guy [Trask,] sure. But not so much the other guy [Tyrion.] No, you know, I've said that before, even regarding [Trask] and it was more like a highfalutin actor thing of not judging your character, seeing them as a villain.

[Trask] really believes he is doing the right thing. He wants to save humankind worldwide in a time of war -- the Vietnam War -- one of the worst wars in our recent history. I guess they're all really bad wars. But he thinks this is an opportunity to bring the world together. But he is also a capitalist and I think if you are going to tack on 'villain' or 'evil' to someone, those are the guys that I don't trust. War profiteers. And he sure has his big T on all these cargo containers with the Sentinels [robots] in them and that's ego and war profiteering and that's where true villainy, for me, lays. The guy screaming at a tree in Central Park, he's crazy and you and I get that, being New Yorkers, but the guys on Wall Street in the suits, bleeding people of their lives, that's villainy to me.

Q: How was it to play opposite U.S. presidents?

Fassbender: It's fun when you take moments in history and play with them and I think that's another great thing the "X-Men" franchise does. It was a very smart idea to do the magic bullet theory for President Kennedy and then to play out those scenes on the lawn with Nixon. Not only is it a very bold move but it's also a fun one. I think taking large strides as opposed to half steps is the best way to approach these kinds of things.

Dinklage: With President Nixon, there is a fine line where you can easily go into comedic territory. So many people have done famous impersonations of him. You could get very Rich Little with it. Mark [Carmacho] certainly did not and the makeup artist did such a great job with that nose, that famous nose.

My mother was an elementary school teacher for 35 years and taught at the Nixon School in New Jersey. I was raised as a very liberal Democrat and she was protesting Nixon when he was in office. And we have a picture of my mother and President Nixon shaking hands. And much to her chagrin, we put it up on the mantle and rubbed it in her face for a little while there. But Mark looked so much like the real man.