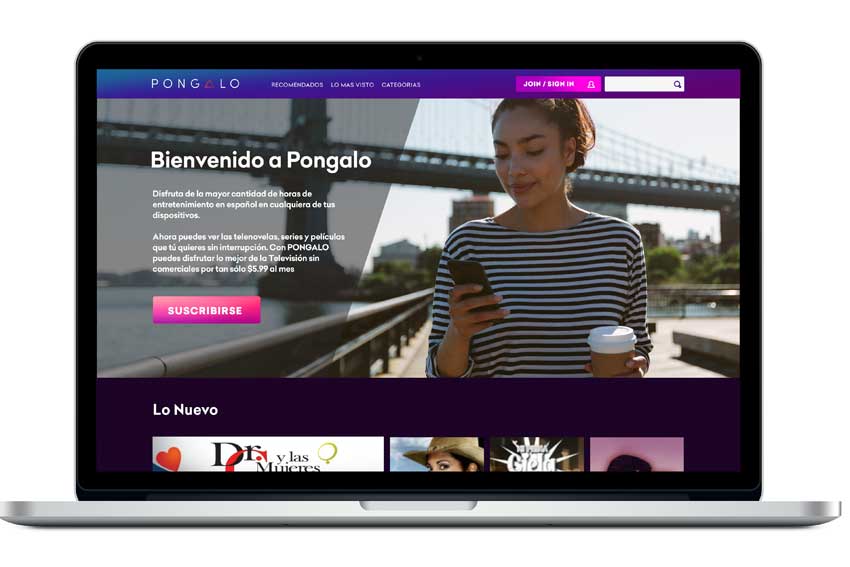 In celebration of Hispanic Heritage Month, U.S.-based Latino digital media company PONGALO (formerly Latin Everywhere) announced today that it has launched a preview of its new global subscription streaming service allowing consumers to “¡Dale Play!” (hit play) on over 10,000 hours of hit telenovelas and a PONGALO original, Hollywood blockbuster movies, TV series, documentaries, and kids programming in Spanish with additional content being added weekly. PONGALO, which offers the largest collection of telenovelas currently available on a single, global digital platform, debuts today at a price of $5.99 per month in the U.S., and includes one-month free with a paid monthly subscription.

“Latinos own more mobile devices than any other demographic, they have $1.6 trillion of buying power, and they over-consume entertainment…and yet, they’re still drastically under-served in digital media,” said Pongalo CEO Jorge Granier. “What better time than during Hispanic Heritage Month to launch a premium subscription streaming service that is tailored made for our audience.”

As part of the new service, PONGALO subscribers will have exclusive access to the world digital Premiere of its original telenovela Piel Salvaje (co-produced with RCTV Productions), a story of two families divided by power, vengeance and love, starring Miss Universe runner-up Irene Esser and Carlos Felipe Alvarez. In addition, a second original telenovela will be coming soon to the service, which also features the greatest classic telenovelas of all time from Mexico, Venezuela, and Colombia, including Kassandra, La Mujer de Judas, El Cartel de los Sapos, and Juana la Virgen, the basis for the hit U.S. television series Jane the Virgin. Likewise, PONGALO rounds out its library of over 1,000 Spanish-language movies from Latin America and Spain by utilizing its partnership with Hollywood’s Revolution Studios to offer the greatest hits (in Spanish) from the studio’s 140-title library of primarily Sony and Warner Bros films, including xXx, Black Hawk Down, Daddy Day Care, and Maid in Manhattan.

Much like the early days of Hulu, users can experience a limited amount of content for free, with PONGALO’s premium titles available only with a paid subscription. PONGALO will initially be available via its Android and Apple apps, as well as via the web at PONGALO.com, and through global partnerships, such as its recently announced partnership with global mobile carrier Telefonica.

Pongalo CEO Jorge Granier and Chairman Rich Hull said in a joint statement: “Over the past two years, we really took the time to build our programming expertise through successful partnerships with our friends at Netflix and Hulu, and then by building our own audience on YouTube, which will surpass 3 billion views this year. As such, audiences can be certain that, with a PONGALO subscription, they’ll be seeing a robust offering of their favorite content within an authentically-Latino experience – all at about half the price of general population services.”

Hull added, “We’re not trying to out-Netflix Netflix. We know our audience loves it when Netflix makes its studio content and originals available in Spanish. Yet, our Latino audiences have told us that they want both Netflix and PONGALO subscriptions in order to share their wallets between two very different experiences and types of programming.”
While a U.S. leader has yet to emerge in the nascent Spanish-language SVOD OTT space, the robust market potential has been validated by recent announcements about upcoming Latino-focused streaming services from major media players, such as Cox Communications’ Glosi, and a new partnership formed this month by Lionsgate and Univision to stream Spanish-language movies.

PONGALO was formed more than two years ago to consolidate three digital media companies with more than ten years of combined operating history. While its team originally found success through its content deals with Netflix and Hulu, as well as through U.S. remakes based on its IP, such as with the CW Networks’ Golden Globe-winning series Jane the Virgin, the company most recently made its mark by building a massive Latino audience on YouTube, an asset which separates it from other players who might enter the Latino SVOD space.