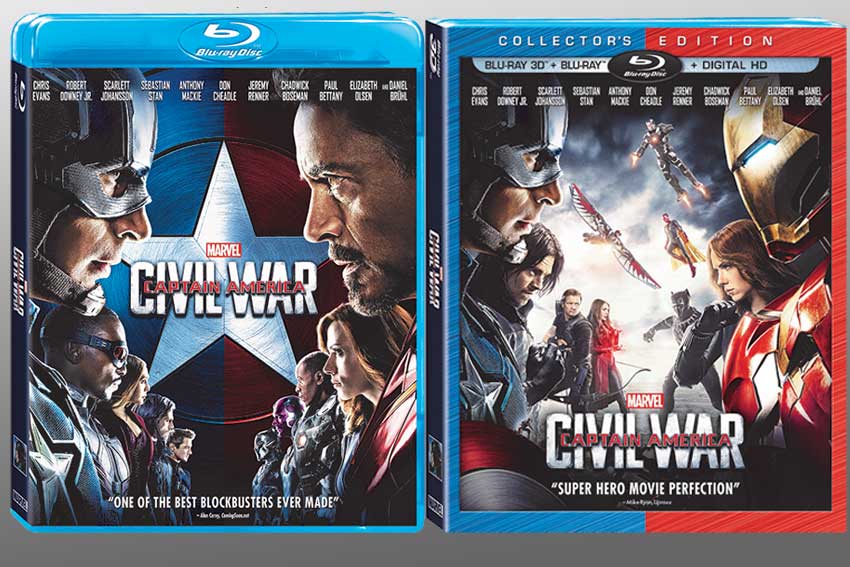 Audiences will be able to bring home the very entertaining CAPTAIN AMERICA: CIVIL WAR when it arrives on Digital HD, Digital 3D and Disney Movies Anywhere on Sept. 2 and on Blu-ray™ 3D, Blu-ray, DVD and On-Demand on Sept. 13 with over 60-minutes of extras and first look at Benedict Cumberbatch as DOCTOR STRANGE.

Marvel’s CAPTAIN AMERICA: CIVIL WAR debuted to $179.1 million—the fifth-biggest domestic opening of all time. The home release may break additional records once you check out the extras that come with the film that seemed to be equally liked by moviegoers and critics.

More than 60-minutes of thrilling, exclusive bonus material includes: an inside look at the evolution of lead characters Steve Rogers and Tony Stark, a behind-the-scenes exclusive on the making of Marvel’s “Captain America: Civil War,” never-before-seen deleted scenes and hilarious outtakes. Plus, home audiences can learn more about the latest additions to the MCU and get an exclusive, first look at Marvel’s “Doctor Strange,” starring Benedict Cumberbatch, coming to theaters Nov. 4, 2016. A collector's set will also be available for consumption.

United We Stand, Divided We Fall – The Making of Captain America: Civil War Part 1 & Part 2
As the tension mounts, sides are chosen and lines drawn. Learn more about the characters on each side—from Captain America and Iron Man to the latest recruits. In this complete behind-the-scenes look at a landmark in the Marvel saga, we’ll examine their stories through exclusive footage and interviews and discover just what went into selecting the Super Hero teams, filming the epic action sequences and introducing Black Panther and Spider-Man to the MCU.

Iron Man: The Road to Civil War
From Gulmira to Sokovia, delve into the development and evolution of one of the most iconic characters in the Marvel Cinematic Universe.

Break the tension of this high-stakes conflict with some hilarious outtakes featuring the lighter side of your favorite Super Heroes.

*Bonus features may vary by retailer. The DVD does not include any bonus materials.

Captain America: Civil War' Movie Review: It Makes Up For Age of Ultron