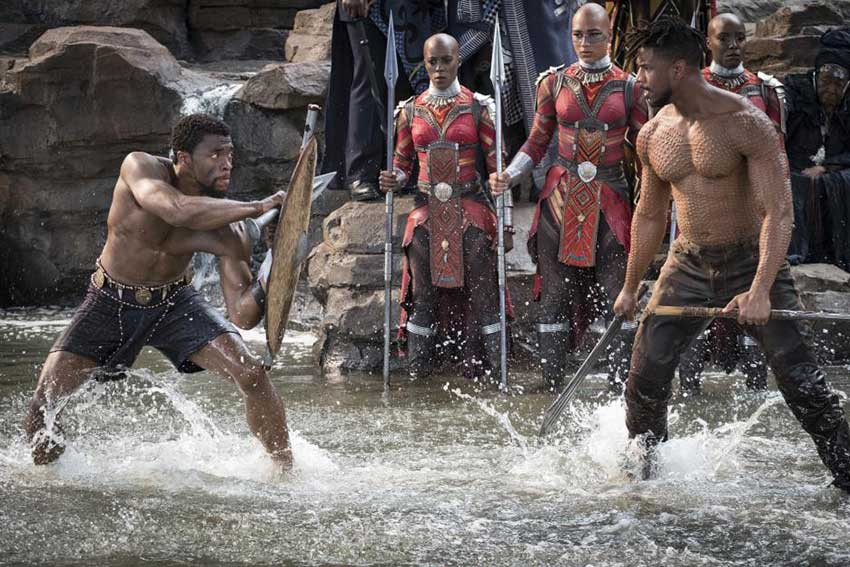 BLACK PANTHER is the first superhero movie nominated for an Academy Award, and Sunday night it took home the Screen Actors Guild Award for Best Ensemble. Now Marvel and Disney is bringing back the blockbuster to AMC Theaters for one-week for free in celebrating of Black History Month. See the details on how to see it for free below.

BLACK PANTHER returns to AMC Theaters only beginning Friday, February 1 for a one-week engagement. Fans of all ages can see the movie for free in honor of Black History Month, and the Walt Disney Company is donating a $1.5 million grant to UNCF to help minority students get to and through college.

For free tickets to the “Black Panther” showings and a list of AMC participating theaters go to: weticketit.com/blackpanther

Disney released an official announcement Monday afternoon. Read it below.

'Black Panther' Movie Review: The Most Radical Superhero Movie Ever

BURBANK, CALIF. (Jan. 28, 2019)—Disney announced today that Academy Award®-nominated and SAG® winner “Black Panther” will return to the big screen to celebrate Black History Month for a one-week engagement, February 1-7, at 250 participating AMC Theatres locations. To ensure that the movie is accessible to all, tickets are free for everyone, and there will be two showings per day at each participating theater.

The Walt Disney Company will also give a $1.5 million grant to support UNCF (United Negro College Fund) in furthering its mission to help minority students access and move to and through college. For nearly 75 years, UNCF has been providing scholarships to students in need, and this grant is part of The Walt Disney Company’s longstanding commitment to diverse communities and to expanding the pipeline of talent.

“‘Black Panther’ is groundbreaking for many reasons, including the rich diversity of voices behind its success,” said Robert A. Iger, Chairman and Chief Executive Officer, The Walt Disney Company.  “The story also showcases the power of knowledge to change the world for the better, and the importance of ensuring everyone has access to it.  We’re proud to provide thousands of free screenings of ‘Black Panther’ in hopes it will continue to inspire audiences, and to support UNCF with a $1.5 million grant to make the dream of higher education a reality for more students.”

UNCF (United Negro College Fund) is the nation’s largest and most effective minority education organization. To serve youth, the community and the nation, UNCF supports students’ education and development through scholarships and other programs, strengthens its 37 member colleges and universities, and advocates for the importance of minority education and college readiness.

“We know that providing aspiring young minority talent with scholarships and professional development opportunities is vital to making their dreams a reality,” said UNCF President and CEO Dr. Michael Lomax. “UNCF is grateful for The Walt Disney Company’s enduring commitment to expanding these types of opportunities, and we’re excited to continue to do so through our Walt Disney Company/UNCF Corporate Scholars Program. I recall the excitement we all had when ‘Black Panther’ was first released and it’s fantastic that Disney is bringing the record-breaking movie back to the big screen so that we can relive that excitement. Wakanda Forever!”

“Almost a year ago, movie-lovers were transported to Wakanda, and the guest response to ‘Black Panther’ was unlike anything our industry has seen before,” said Adam Aron, CEO and President of AMC. “AMC is excited this best-picture nominated film is once again accessible on the big screen at AMC. We are also pleased to play a constructive role in Disney’s generous support of Black History Month.”

For free tickets to the “Black Panther” showings and a list of AMC participating theaters go to: weticketit.com/blackpanther