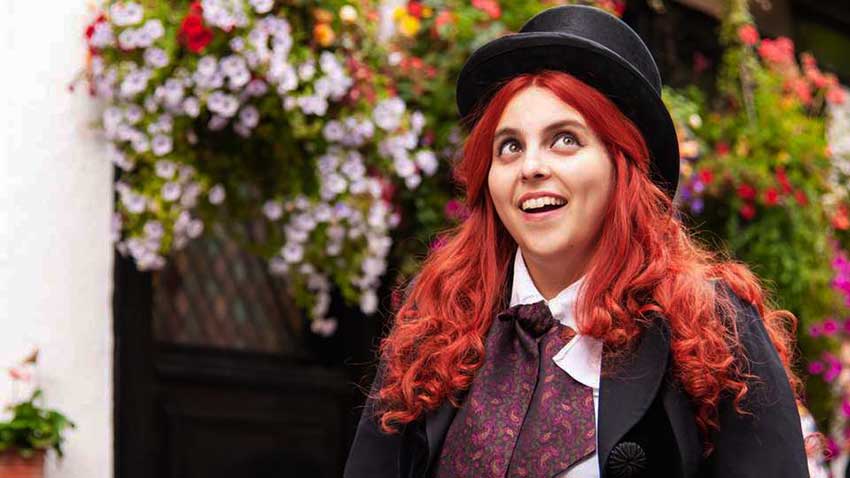 Based on the best-selling novel by Caitlin Moran, HOW TO BUILD A GIRL follows Johana Morrigan (Beanie Feldstein), a brilliant and quirky wanna be writer who dreams of a bigger life filled with fantasy and adventure. From a struggling working class family in Wolverhampton England during the 1990s, her escapist fantasies include talking to her wall of heroes like Sylvia Plath, the Brontë sisters, Elizabeth Taylor, Julie Andrews, Sigmund Freud and a few other historical and literary figures.

Johana is confident her talent in writing could help her break free of her humdrum life. When she enters a writing contest for a music critic position, she critiques "Tomorrow" from the "Annie" musical. When called in for an interview, the mostly male writing staff dismiss her as a joke. Afterwards she reinvents herself into Dolly Wilde with fiery hair and clothes right out of Rocky Picture Horror Show, and walks back into their office to insists on another try. She's a hit after she takes a different approach in writing toxic and negative reviews of bands and musicians in the weekly music magazine. With fame comes a new confidence that transforms her into a narcissist and a sex maniac which plunges her into an existential crisis.

Directed By English director Coky Giedroyć, HOW TO BUILD A GIRL is an inspirational tale of a young woman finding her way in the world where men are the gate keepers. However unlike other coming-of-age stories, Johana, while bullied at school for her awkwardness, is quite confident in herself both mentally and in her body image. She uses that confidence to convince the self-important indie critics to take a chance on her, and transforms herself physically into the part of a rock critic.

Beanie Feldstein, 26, is no stranger to playing teenagers on screen. She burst on the screen with her scene-stealing role in Seth Rogen's NEIGHBORS 2: SORORITY RISING, then LADY BIRD and last year's BOOKSMART ironically as a teenager looking to break out of her boring life. She is simply adorable and believable as this bright-eyed and magical young woman taking life by the horns but losing a part of herself in the process.

Feldstein has proven she has range as an actress, and next up she's portraying Monica Lewinsky for "American Crime Story" which no doubt will be a great performance for the 26-year-old.

Alfie Allen from "Game of Thrones" is also wonderful and sobering as a musician who recognizes the beauty of Johana's innocence, but doesn't take advantage of it like the other men. Luckily with this role, most of us can get past the fact that he killed John Wick's dog and betrayed the Starks.

HOW TO BUILD A GIRL is an inspirational tale that many young girls could relate to, and even to us middle-aged female film writers.

HOW TO BUILD A GIRL is in select theaters and On Demand May 8.